The Essential Lewis and Clark (Paperback) 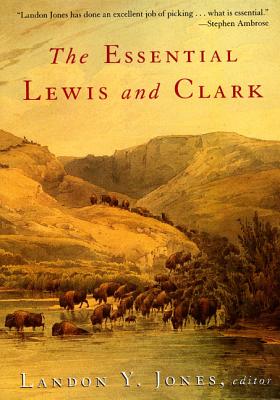 This compact volume of the journals of Lewis and Clark, compiled by American Book Award nominee Landon Y. Jones, includes all of the most riveting tales of their adventure—in their own words

The journals of Meriwether Lewis and William Clark remain the single most important document in the history of American exploration. Here is a concise, breathtaking record of Lewis and Clark's legendary journey to the Pacific, written by the two captains—under unspeakable stress and the threat of constant danger—with an immediacy that startles to this day.

Through these tales of adventure we see the Great Plains, the Rocky Mountains, and western rivers the way Lewis and Clark first observed them—majestic, pristine, uncharted, and awe-inspiring. We are in the moccasins of Lewis and Clark as they witness other wonders no European-Americans had ever seen before: new creatures such as antelope, prairie dogs, and, most memorably, grizzly bears. Also included are the explorers’ encounters with Native Americans, featuring the amazing reunion between Sacagawea and her brother, a Shoshone chief who secured the expedition’s safe passage over the Continental Divide.

Landon Jones has selected the most memorable journal entries left behind by Lewis and Clark, and then edited and annotated them for all readers—those steeped in lore of the expedition, and newcomers to this unforgettable journey.

Landon Y. Jones is the author of Great Expectations: America and the Baby Boom Generation. He has reported, written, and edited at Life, Time, Money, and People magazines. He is a member of the National Lewis and Clark Bicentennial Council.

“A powerful and concise version of the journals.” — Travel & Leisure

"In The Essential Lewis and Clark, Landon Jones presents the highlights of an Americn classic by letting Lewis and Clark tell their story in their own words." — Dayton R. Duncan, writer and producer of Ken Burns' PBS documentary, Lewis & Clark

"Landon Jones has delivered a handy, accessible version of the Lewis and Clark journals, jut right for the millions of intrepid travelers who will want to retrace the explorers' path in commemoration of the expedition's bicentennial. This book should encourage the reader to delve further into this fascinating chapter of American history, by reading the entire journals. — David Borlaug, President, National Lewis and Clark Bicentennial Council

"St. Louis has had some national heroes who have excited the nation as a whole. Today, it is Mark McGuire. Earlier in this century, it was Charles Lindberg. Even earlier in the previous century, it was the fascinating duo of Meriwether Lewis and William Clark. Landon Jones has ever-so-skillfully assembled the journals of Lewis and Clark as to allow today's readers to become participants in their historic journey." — Thomas F. Eagleton, former U.S. senator of the State of Missouri

“Landon Jones has done an excellent job of picking out what is essential and leaving out the rest. Anyone who wants to know more about how Lewis and Clark...accomplished what they did...should have this book.” — Stephen E. Ambrose