The Amazing Maurice and His Educated Rodents (Paperback) 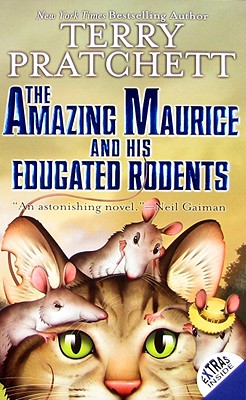 The Amazing Maurice and His Educated Rodents (Paperback)

The Amazing Maurice runs the perfect Pied Piper scam. This streetwise alley cat knows the value of cold, hard cash and can talk his way into and out of anything. But when Maurice and his cohorts decide to con the town of Bad Blinitz, it will take more than fast talking to survive the danger that awaits.

For this is a town where food is scarce and rats are hated, where cellars are lined with deadly traps, and where a terrifying evil lurks beneath the hunger-stricken streets....

Set in Terry Pratchett's beloved Discworld, this masterfully crafted, gripping read is both compelling and funny. When one of the world's most acclaimed fantasy writers turns a classic fairy tale on its head, no one will ever look at the Pied Piper—or rats—the same way again!

Sir Terry Pratchett was the internationally bestselling author of more than thirty books, including his phenomenally successful Discworld series. His young adult novel, The Amazing Maurice and His Educated Rodents, won the Carnegie Medal, and Where's My Cow?, his Discworld book for “readers of all ages,” was a New York Times bestseller. His novels have sold more than seventy five million (give or take a few million) copies worldwide. Named an Officer of the British Empire “for services to literature,” Pratchett lived in England. He died in 2015 at the age of sixty-six.

“Delves into weighty issues but keeps its sense of dark humor.” — USA Today

“Pratchett rethinks a classic story and comes up with a winner. A not–to–be–missed delight.” — School Library Journal (starred review)

“Manages to be hilarious, moving, scary, impishly vulgar and wickedly wise, sometimes all at once.” — Locus Magazine

“Pratchett’s absorbing, suspenseful adventure is deepened by a willingness to tackle the questions of existence.” — Horn Book Magazine

“This is his first Discworld novel aimed specifically at YA readers, and it should win him new fans.” — KLIATT

“Pratchett leaves none of his wit behind in this exploration of Discworld for younger readers.” — Bulletin of the Center for Children’s Books (recommended)

“Clearly destined for great things…deeply pleasurable and a wonderful and entertaining read.” — The Bookseller (Great Britain)