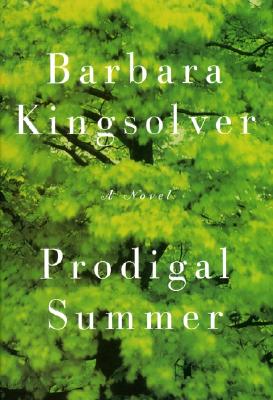 By Barbara Kingsolver
$26.00
Email or call for price.

Barbara Kingsolver, a writer praised for her"extravagantly gifted narrative voice" (New York Times Book Review), has created with this novel a hymn to wildness that celebrates the prodigal spirit of human nature, and of nature itself.

Prodigal Summer weaves together three stories of human love within a larger tapestry of lives inhabiting the forested mountains and struggling small farms of southern Appalachia. At the heart of these intertwined narratives is a den of coyotes that have recently migrated into the region. Deanna Wolfe, a reclusive wildlife biologist, watches the forest from her outpost in an isolated mountain cabin where she is caught off-guard by Eddie Bondo, a young hunter who comes to invade her most private spaces and confound her self-assured, solitary life. On a farm several miles down the mountain, another web of lives unfolds as Lusa Maluf Landowski, a bookish city girl turned farmer's wife, finds herself unexpectedly marooned in a strange place where she must declare or lose her attachment to the land. And a few more miles down the road, a pair of elderly, feuding neighbors tend their respective farms and wrangle about God, pesticides, and the complexities of a world neither of them expected.

Over the course of one humid summer, as the urge to procreate overtakes a green and profligate countryside, these characters find connections to one another and to the flora and fauna with which they necessarily share a place. Their discoveries are embedded inside countless intimate lessons of biology, the realities of small farming, and the final, urgent truth that humans are only one part of life on earth.

With the richness that characterizes Barbara Kingsolver's finest work, Prodigal Summer embraces pure thematic originality and demonstrates a balance of narrative and ideas that only an accomplished novelist could render so beautifully.

Barbara Kingsolver is the author of nine bestselling works of fiction, including the novels, Flight Behavior, The Lacuna, The Poisonwood Bible, Animal Dreams, and The Bean Trees, as well as books of poetry, essays, and creative nonfiction. Her work of narrative nonfiction is the enormously influential bestseller Animal, Vegetable, Miracle: A Year of Food Life. Kingsolver’s work has been translated into more than twenty languages and has earned literary awards and a devoted readership at home and abroad. She was awarded the National Humanities Medal, our country’s highest honor for service through the arts, as well as the prestigious Dayton Literary Peace Prize for her body of work. She lives with her family on a farm in southern Appalachia.