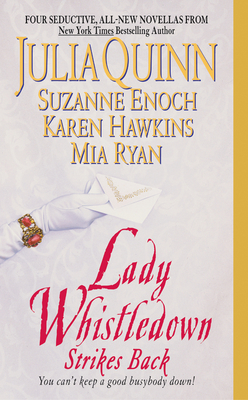 Join the Bridgertons, and the rest of the ton, as they pore over (and gossip about) Lady Whistledown’s latest musings. The elusive Regency-era gossip columnist -- popularized in # 1 New York Times bestselling author Julia Quinn’s Bridgerton novels, now a series created by Shondaland for Netflix – reveals society’s most recent secrets in this second glittering anthology, following the New York Times bestseller, The Further Observations of Lady Whistledown.

Was it the fortune hunter, the gambler, the servant, or the rogue? All of London is abuzz with speculation, but it is clear that one of four couples is connected to the crime. —Lady Whistledown’s Society Papers, May 1816

Julia Quinn enchants: A dashing fortune hunter is captivated by the Season’s most desired debutante . . . and must prove he is out to steal the lady’s heart, not her dowry.

Suzanne Enoch tantalizes: An innocent miss who has spent her life scrupulously avoiding scandal is suddenly—and secretly—courted by London’s most notorious rogue.

Karen Hawkins seduces: A roving viscount comes home to rekindle the passionate fires of his marriage . . . only to discover that his beautiful, headstrong bride will not be so easily won.

Mia Ryan delights: A lovely, free-spirited servant is dazzled by the romantic attentions of a charming earl . . . sparking a scandalous affair that could ruin them both.

Karen Hawkins was raised in Tennessee, a member of a huge extended family that included her brother and sister, an adopted sister, numerous foster siblings, and various exchange students. In order to escape the chaos (and while hiding when it was her turn to do the dishes), she would huddle under the comforter on her bed with a flashlight and a book, a habit she still embraces to this day.

A native and current resident of Southern California, Suzanne Enoch loves movies almost as much as she loves books. When she is not busily working on her next novel, Suzanne likes to contemplate interesting phenomena, like how the three guppies in her aquarium became 161 guppies in five months.

When not carpooling, scraping gum off seatbelts, doing laundry and staring insanity in the face, Mia Ryan likes to escape into her writing. You can also read Mia Ryan's "A Dozen Kisses" in The Further Observations of Lady Whistledown, an Avon book published in February 2003.

“A strong and charming encore to The Further Observations of Lady Whistledown, this superb Regency-era novella collection is punctuated by gossip columnist Lady Whistledown’s witty comments and penned by the same authors who contributed to the previous book . . . this winsome collection is a cut above most romance anthologies.”  — Publishers Weekly

“Quinn is . . . a romance master. [She] has created a family so likable and attractive, a community so vibrant and engaging, that we want to crawl into the pages and know them.” — NPR Books