Savage Summit: The Life and Death of the First Women of K2 (Paperback) 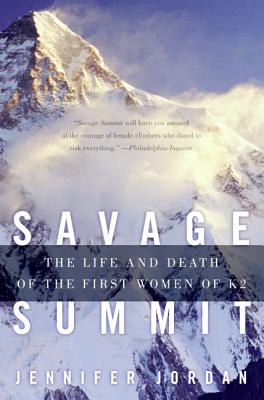 Though not as tall as Everest, the "Savage Mountain" is far more dangerous. Located on the border of China and Pakistan, K2 has some of the harshest climbing conditions in the world. Ninety women have scaled Everest but of the six women who reached the summit of K2, three lost their lives on the way back down the mountain and two have since died on other climbs.

In Savage Summit, Jennifer Jordan shares the tragic, compelling, inspiring, and extraordinary true stories of a handful of courageous women -- mothers and daughters, wives and lovers, poets and engineers -- who defeated this formidable mountain yet ultimately perished in pursuit of their dreams.

Jennifer Jordan has lived at the base of K2 twice while writing and producing the National Geographic documentary The Women of K2. She is a writer, producer, public speaker, and journalist, having created, produced, and hosted her own public radio talk show. Jennifer lives with her husband, filmmaker and adventurer Jeff Rhoads, in Salt Lake City.

“Jordan...gives us a sense of the rapture that comes from standing on top of the world’s highest mountains.” — Los Angeles Times