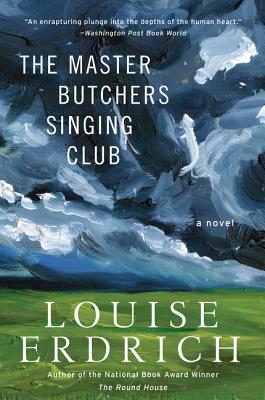 Having survived World War I, Fidelis Waldvogel returns to his quiet German village and marries the pregnant widow of his best friend, killed in action. With a suitcase full of sausages and a master butcher's precious knife set, Fidelis sets out for America. In Argus, North Dakota, he builds a business, a home for his family—which includes Eva and four sons—and a singing club consisting of the best voices in town. When the Old World meets the New—in the person of Delphine Watzka—the great adventure of Fidelis's life begins. Delphine meets Eva and is enchanted. She meets Fidelis, and the ground trembles. These momentous encounters will determine the course of Delphine's life, and the trajectory of this brilliant novel.

Louise Erdrich is the author of fifteen novels as well as volumes of poetry, children’s books, short stories, and a memoir of early motherhood. Her novel The Round House won the National Book Award for Fiction. The Plague of Doves won the Anisfield-Wolf Book Award and was a finalist for the Pulitzer Prize, and her debut novel, Love Medicine, was the winner of the National Book Critics Circle Award. Erdrich has received the Library of Congress Prize in American Fiction, the prestigious PEN/Saul Bellow Award for Achievement in American Fiction, and the Dayton Literary Peace Prize. She lives in Minnesota with her daughters and is the owner of Birchbark Books, a small independent bookstore.

“A substantial, beautifully composed, confident work of art … both expansive in its reach and intimate in its intense focus.”
— O magazine

“An enrapturing plunge into the depths of the human heart.”
— Washington Post Book World

“[A] magnificent tale...poignant in the mysteries it evokes and patient with the questions it leaves unanswered.”
— Los Angeles Times Book Review

“Miraculous …[Erdrich is] at the peak of powers as a writer … Her work is as melodious as ever.”
— Boston Globe

“Each moment and its particulars dazzles … Fidelis and firm-bellied Delphine and the rest [of the characters] are masterworks.”
— San Francisco Chronicle

“THE MASTER BUTCHERS SINGING CLUB can surely be cast as the most wrenching and wise of Erdrich’s nine novels.”
— Miami Herald

“The Master Butchers Singing Club reveals on of our finest writers at the peak of her considerable powers.”
— Minneapolis Star Tribune

“Not since Ricard Russo’s 2001 novel EMPIRE FALLS ... have I enjoyed the company of such memorable characters.”
— Bob Minzesheimer, USA Today

“Erdrich is an abundantly gifted storyteller, with a penchant for meticulous detail and tremendous empathy for her characters.”
— Charlotte Observer

“Grand and generous fiction… Erdrich’s most sweeping and ambitious yet.”
— BookPage