Signature in the Cell: DNA and the Evidence for Intelligent Design (Paperback) 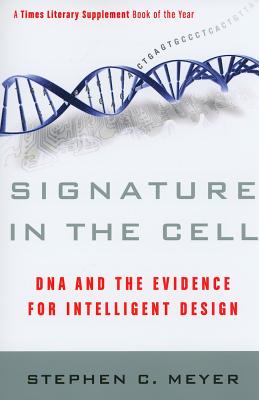 “Signature in the Cell is a defining work in the discussion of life’s origins and the question of whether life is a product of unthinking matter or of an intelligent mind. For those who disagree with ID, the powerful case Meyer presents cannot be ignored in any honest debate. For those who may be sympathetic to ID, on the fence, or merely curious, this book is an engaging, eye-opening, and often eye-popping read” — American Spectator

Named one of the top books of 2009 by the Times Literary Supplement (London), this controversial and compelling book from Dr. Stephen C. Meyer presents a convincing new case for intelligent design (ID), based on revolutionary discoveries in science and DNA. Along the way, Meyer argues that Charles Darwin’s theory of evolution as expounded in The Origin of Species did not, in fact, refute ID. If you enjoyed Francis Collins’s The Language of God, you’ll find much to ponder—about evolution, DNA, and intelligent design—in Signature in the Cell.

Stephen C. Meyer received his Ph.D. from the University of Cambridge in the philosophy of science after working as an oil industry geophysicist. He now directs the Center for Science and Culture at the Discovery Institute in Seattle, Washington. He authored Signature in the Cell, a (London) Times Literary Supplement Book of the Year.

“Signature in the Cell is a defining work in the discussion of life’s origins . . . the powerful case Meyer presents cannot be ignored in any honest debate. . . [T]his book is an engaging, eye-opening, and often eye-popping read” — American Spectator

“A fascinating exploration . . . Whether you believe intelligent design is true or false, Signature in the Cell is a must-read book.” — Dr. Scott Turner, professor, environmental and forest biology, State University of New York, and author of The Tinkerer’s Accomplice