The Lost Heart of Asia (Paperback) 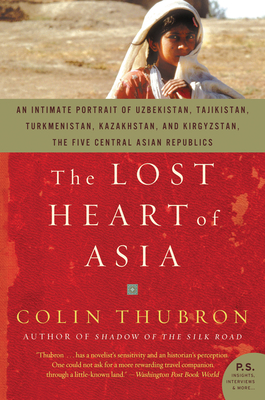 A land of enormous proportions, countless secrets, and incredible history, Central Asia was the heart of the great Mongol empire of Tamerlane and scene of Stalin's cruelest deportations. A remote and fascinating region in a constant state of transition—never more so than since the collapse of the Soviet Union—it encompasses terrain as diverse as the Kazakh steppes, the Karakum desert, and the Pamir mountains. In The Lost Heart of Asia, acclaimed, bestselling travel writer Colin Thubron carries readers on an extraordinary journey through this little understood, rarely visited, yet increasingly important corner of the world.

Colin Thubron is an acclaimed travel writer and novelist. His first books were about the Middle East – Damascus, Lebanon and Cyprus. In 1982 he travelled by car into the Soviet Union, a journey he described in Among the Russians. From these early experiences developed his classic travel books: Behind the Wall: A Journey through China (winner of the Hawthornden Prize and the Thomas Cook Travel Award), The Lost Heart of Asia, In Siberia (Prix Bouvier), Shadow of the Silk Road and To a Mountain in Tibet.