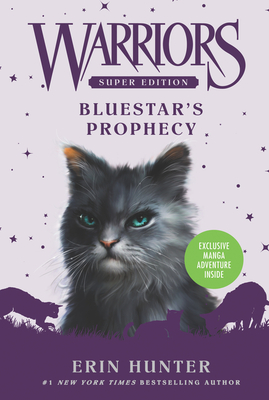 This is book number 2 in the Warriors Super Edition series.

Warriors Super Edition: Bluestar’s Prophecy is an epic stand-alone adventure in Erin Hunter’s #1 nationally bestselling Warriors series! In this Super Edition, discover the secrets behind legendary ThunderClan leader Bluestar’s rise to power, before the events of Warriors #1: Into the Wild.

Bluestar has been prophesied to guide ThunderClan through a time of great turmoil. But dangerous secrets from her past haunt her every paw step—shadowy whispers that may destroy her . . . and her Clan.

Join the legion of fans who have discovered the epic adventures, fierce warrior cats, and thrilling fantasy world of the mega-bestselling Warriors series. This stand-alone entry is perfect for new readers and dedicated fans alike.

Erin Hunter is inspired by a love of cats and a fascination with the ferocity of the natural world. In addition to having great respect for nature in all its forms, Erin enjoys creating rich mythical explanations for animal behavior. She is the author of the Warriors, Seekers, Survivors, Bravelands, and Bamboo Kingdom series. Erin lives in the UK.

Wayne McLoughlin studied art at San Diego State University and has worked as a writer and illustrator for such magazines as Esquire and National Lampoon. His books for children include Fireflies, by Alice Hoffman, Here is the Wetland, by Madeleine Dunphy (both Hyperion), and Loch, by Paul Zindel. He lives with his wife and daughter in Bellows Falls, Vermont.