A Pearl in the Storm: How I Found My Heart in the Middle of the Ocean (Paperback) 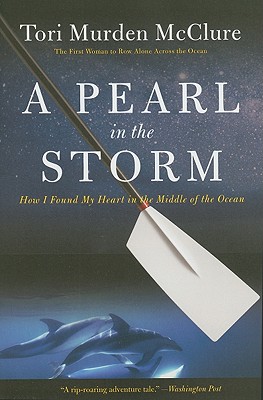 “Tori Murden McClure's account or rowing solo across the Atlantic Ocean is a compelling adventure story expertly interwoven with a wrenching and brutally honest account of the emotional ups and downs of her life. A Pearl in the Storm is a memoir that doesn't just recount a life -- it truly reveals the person who lived it.”
— Carol Besse, Carmichael's Bookstore, Louisville, KY

“Unlike Hemingway’s The Old Man and the Sea, Tori Murden McClure’s true story of a woman and the sea and a boat named American Pearl is one of victory. . . . If you want to be inspired, read this book. You won’t stop till you’ve finished.” — Sena Jeter Naslund, author of Ahab's Wife

In this thrilling memoir by the first woman to row solo across the Atlantic Ocean, Tori McClure finds that what she is looking for lies not in a superhuman show of strength, but rather in embracing what it means to be human.

"In the end, I know I rowed across the Atlantic to find my heart, but in the beginning, I wasn't aware that it was missing."

In June 1998, Tori McClure began rowing across the Atlantic Ocean solo in a twenty-three-foot plywood boat with no motor or sail. Within days she lost all communication with shore but decided to forge ahead -- not knowing that 1998 would turn out to be the worst hurricane season on record in the North Atlantic. When she was nearly killed by a series of violent storms, Tori was forced to signal for help and head home in what felt like disgrace. But then her life changed in unexpected ways. She was hired by Muhammad Ali, who told her she did not want to be known as the woman who "almost" rowed across the Atlantic. And at thirty-five, Tori fell in love.

A Pearl in the Storm is Tori's enthralling story of high adventure—and of her personal quest to discover that embracing her own humanity was more important than superhuman feats.

A vice president at Spalding University, Tori Murden McClure's firsts include being the first woman to row solo across the Atlantic and to ski over land to the South Pole. She holds several degrees, including a master's in divinity from Harvard University. Tori lives in Louisville, Kentucky, with her husband.

“Unlike Hemingway’s The Old Man and the Sea, Tori Murden McClure’s true story of a woman and the sea and a boat named American Pearl is one of victory. If you want to be inspired, read this book. You won’t stop till you’ve finished.” — Sena Jeter Naslund, author of Ahab's Wife

“Tori Murden McClure is one of the most remarkable women I have ever met; her journey across the ocean is equal only to her journey of the heart. This is a story of courage, adventure, and personal discovery that will appeal to women—and men of all ages.” — Candice Bergen

“In this fine book, Tori McClure generously gives us at the same time a wonderfully told adventure story and a moving account of a storm-wracked journey through self-discovery into healing.” — Charles Gaines, author of The Next Valley Over

“For those six billion or so of us on planet Earth today who will never row across an ocean, this extraordinary narrative by one fellow human who did so transports us to places beautiful, haunting, daunting, terrifying, and uplifting.” — Roy Hoffman, author of Almost Family and Chicken Dreaming Corn

“The reader of this book encounters a rare spirit whose courage is an inspiration.” — Jill Ker Conway, author of The Road from Coorain

“At once the tale of a familiar dilemma and an account of extraordinary courage. But what McClure’s profound and powerfully written romance truly proves is that the measure of her heart eclipses the extent of her valor.” — Louisville Courier-Journal

“With her splendid courage and lucid voice, Tori Murden McClure updates an ancient seafarer’s tale. Hers is the story of the sheer, bold muscle of a contemporary woman who chose to row for her life alone across the whole Atlantic Ocean. Murden lived the metaphor that rises up from our most challenging dreams: one woman, one little boat, one vast ocean, and the grit to cross it at any cost—and survive.” — Molly Peacock, author of Paradise, Piece by Piece