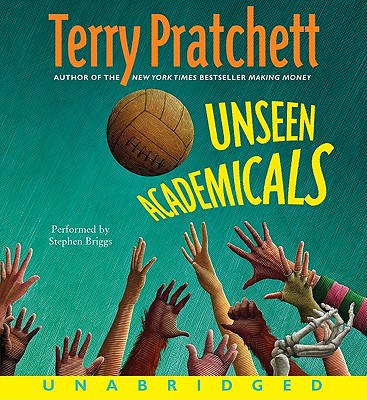 By Terry Pratchett, Stephen Briggs (Read by)
$39.99
Email or call for price.

This is book number 37 in the Discworld series.

Discworld lives on in Unseen Academicals, the latest novel from Terry Pratchett. Delivering the trademark insight and humor readers the world over have come to expect from “the purely funniest English writer since Wodehouse” (Washington Post Book World), Unseen Academicals focuses on the wizards at Ankh-Morpork’s Unseen University, who are reknowned for many things—sagacity, magic, and their love of teatime—as they attempt to conquer athletics.

Sir Terry Pratchett was the internationally bestselling author of more than thirty books, including his phenomenally successful Discworld series. His young adult novel, The Amazing Maurice and His Educated Rodents, won the Carnegie Medal, and Where's My Cow?, his Discworld book for “readers of all ages,” was a New York Times bestseller. His novels have sold more than seventy five million (give or take a few million) copies worldwide. Named an Officer of the British Empire “for services to literature,” Pratchett lived in England. He died in 2015 at the age of sixty-six.