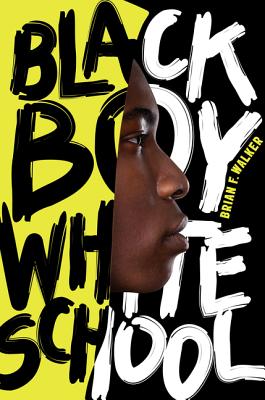 In a hard-hitting novel about fitting in—or not—Anthony “Ant” Jones gets transported from his East Cleveland hood to an almost all-white prep school and has to figure out where he belongs...before he loses himself entirely. Black Boy White School is a memorable debut that will appeal to fans of Walter Dean Myers and Sherman Alexie.

Anthony has never been outside his rough neighborhood when he receives a scholarship to Belton Academy, an elite prep school in Maine. But at Belton things are far from perfect. Everyone calls him “Tony,” assumes he’s from Brooklyn, expects him to play basketball, and yet acts shocked when he fights back.

As Anthony tries to adapt to a world that will never fully accept him, he’s in for a rude awakening: Home is becoming a place where he no longer belongs.

In debut author Brian F. Walker’s honest and dynamic novel about staying true to yourself, Anthony might find a way to survive at Belton, but what will it cost him?

Brian F. Walker grew up in East Cleveland, where he ran with gangsters, drug dealers, and thugs until age fourteen, when he was sent to an elite boarding school and a world he had no way of understanding. For the past seventeen years he has taught high school English, coached basketball, and served as an admissions officer at a prep school in Weston, Massachusetts. He recently won a grant for fiction writing from the Massachusetts Cultural Council, in addition to numerous awards for playwriting, short stories, and journalism. Brian lives in Massachusetts with his wife and daughter.