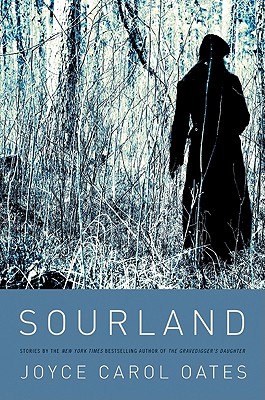 “Oates is a fearless writer.”

“Oates is a master of the dark tale—stories of the hunted and the hunter, of violence, trauma, and deep psychic wounds.”

Sourland is a gripping, haunting, and intensely moving collection of short stories by Joyce Carol Oates, one of America’s preeminent authors. Unforgettable tales that re-imagine the meaning of loss—often through violent means—Sourland is yet another extraordinary read from the literary icon who has previously brought us The Gravedigger’s Daughter, Blonde, We Were the Mulvaneys, and numerous other classic works of contemporary fiction.

“Making sense of life in a cataclysmic inner and outer landscape has been Joyce Carol Oates’ obsession for five decades. This evocative new collection shows just how much sense she can make of it now.”
— Chicago Tribune

“...Innovative, brilliant...there are sentences that leave a deeply sensuous pleasure in their wake...”
— San Francisco Chronicle

“Oates’s fiction has the curious, morbid draw of a flaming car wreck. It’s a testament to Oates’s talent that she can nearly always force the reader to look.”
— Publishers Weekly

“...Vivid...the work reflects a delicious boundary-crossing mix of literary artistry and genre-writing skill...This famously prolific writer continues to surprise us, and that in itself is something to celebrate.”
— Library Journal

“A master class in the art of pure, suspenseful storytelling...Oates is a dangerous writer in the best sense of the word, one who takes risks almost obsessively with energy and relish… [a] dazzling collection.”
— New York Times

“Oates is just a fearless writer. . . with her brave heart and her impossibly lush and dead-on imaginative powers.”
— Los Angeles Times

“Oates remains . . . a living master of the short story-far more virtuosic in manner than the ecstatic realist she is usually taken to be and far more at home in the form, too.”
— Buffalo News

“We think of Oates, like Poe, as a master of terror, but her real mastery is in almost never depicting a strong emotion in isolation...Oates makes for a caustic companion in Sourland - a fearless experimenter forcing the reader ahead of her at knifepoint.”
— Los Angeles Times