The Sum of All Kisses: A Smythe-Smith Quartet (Mass Market) 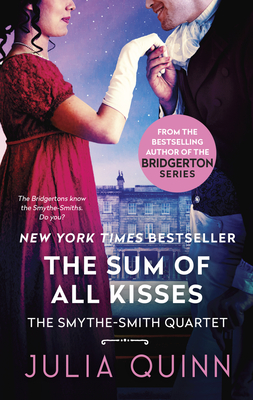 The Sum of All Kisses: A Smythe-Smith Quartet (Mass Market)

From Julia Quinn, the New York Times bestselling author of steamy historical romances, comes the third seductive installment of the Smythe-Smith Quartet, The Sum of All Kisses.

Sarah Pleinsworth can’t forgive Hugh Prentice for the duel he fought three years ago that nearly destroyed her family, sent her cousin fleeing, and left Hugh himself with a badly injured leg. That’s fine with Hugh, who can’t tolerate Sarah’s dramatic ways. But when the two are forced to spend a week together, they find that unexpected kisses, and mutual passion, may have the power to change both of their minds.

Written with Julia Quinn’s trademark style, The Sum of All Kisses is a witty and lighthearted Regency romance.

“Quinn brings her signature style and wit to yet another late-Regency romance, with some character favorites fans have met before… Charmingly romantic, with compelling edges of dark conflict and sexual tension.” — Kirkus Reviews (starred review) on The Sum of All Kisses

“The third sparkling book in her Smythe-Smith quartet is quintessential Quinn: witty, whimsical, and wonderfully romantic.”  — Booklist on The Sum of All Kisses

“[A] wild romp... There’s witty banter, a colorful cast of characters and enough secrets and scandals to keep the gossip-mongers happy. A great, entertaining read.” — RT Book Reviews on The Sum of All Kisses

“[A]n unstoppable romp that sparkles with enough hilarious situations, over-the-top characters, and laugh-out-loud dialog to keep the chuckles coming long after the book is closed. A lovely tale that is just plain fun!” — Library Journal on The Sum of All Kisses