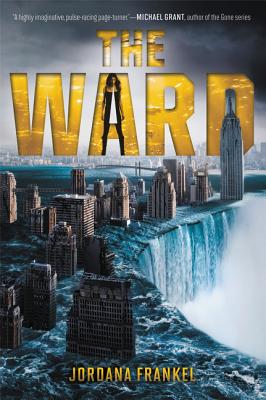 By Jordana Frankel
$9.99
Email or call for price.

Jordana Frankel's thrilling and imaginative YA dystopian novel The Ward is set in a near-future New York City. A catastrophic flood has washed out Manhattan, leaving the rivers polluted and entire neighborhoods underwater. Some areas are quarantined because of an outbreak of a deadly disease.

The illness, known as the Blight, is killing sixteen-year-old Ren's sister. Desperate to save her sister's life, Ren agrees to lead a secret mission from the government to search for a cure. But her quest leads to a confounding mystery beneath the water and an unlikely friendship with a passionate scientist.

Jordana Frankel is a creative-writing instructor at Writopia Lab and a former marketing associate at the Book Report Network. She received her BA from Goucher College and an MFA in creative writing from Hollins University. She currently lives in New York City. The Ward is her first novel.

“Ren is volatile, embittered, and dedicated to the adrenaline surge of racing, but she’s also gutsy, loyal, and at times surprisingly vulnerable. Frankel’s unforgiving, drowned New York serves as a formidable background for her survival story.” — Publishers Weekly