Two or Three Things I Forgot to Tell You (Hardcover) 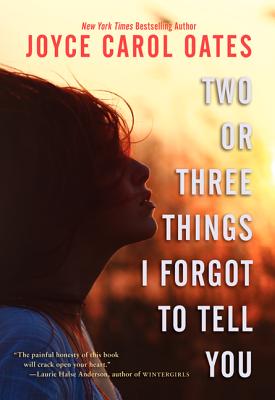 Two or Three Things I Forgot to Tell You (Hardcover)

Two or Three Things I Forgot to Tell You is renowned author Joyce Carol Oates's newest novel for teens. Laurie Halse Anderson, bestselling author of Wintergirls and Speak, said that "the painful honesty of this book will crack open your heart."

Senior year, their last year together, Merissa and Nadia need their best friend Tink more than they ever did before. They have secrets they can share with no one but her, toxic secrets that threaten to unravel their friendship—and themselves. Tink had a secret, too, a big one, but no one knows what it was. And now she's gone. . . .

In a starred review, Kirkus Reviews described Joyce Carol Oates as "a master at portraying the inner lives of teens." In Two or Three Things I Forgot to Tell You, she's created a powerful portrayal of a friendship strong enough to transcend death.

An Amazon Best Book of the Month “The painful honesty of this book will crack open your heart. Joyce Carol Oates takes us from the howling pain of lonely adolescence to the comfort and healing brought about by a friendship strong enough to transcend death.” — Laurie Halse Anderson, author of Speak and Chains

“[A] riveting and poignant story of three teenage girls in crisis. [Oates] is a master at portraying the complex, emotional inner lives of these teens, and their contemporary adolescent voices and perceptions (and misperceptions) ring true. Intense, keenly insightful, nuanced and affecting.” — Kirkus Reviews (starred review)

“A fast pastiche that is as much a triptych of pain as a reminder of resilience.” — ALA Booklist

For Sexy: “Palpable and compelling.” — The Horn Book

“Touching and believable. An unusually sensitive and sympathetic assessment.” — Bulletin of the Center for Children’s Books

For After the Wreck, I Picked Myself Up, Spread My Wings, and Flew Away: “Oates gets the contemporary teen voice just right, and Jenna’s first-person narrative moves at breakneck speed.” — ALA Booklist