The Divine Within: Selected Writings on Enlightenment (Paperback) 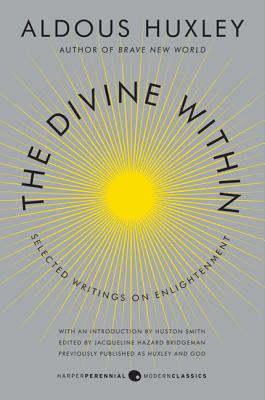 “A genius . . . a writer who spent his life decrying the onward march of the Machine.” — The New Yorker

In this anthology of twenty-six essays and other writings, Aldous Huxley discusses the nature of God, enlightenment, being, good and evil, religion, eternity, and the divine. Huxley consistently examined the spiritual basis of both the individual and human society, always seeking to reach an authentic and clearly defined experience of the divine. Featuring an introduction by renowned religious scholar Huston Smith, this celebration of "ultimate reality" proves relevant and prophetic in addressing the spiritual hunger so many feel today.

Aldous Huxley (1894–1963) is the author of the classic novels Brave New World, Island, Eyeless in Gaza, and The Genius and the Goddess, as well as such critically acclaimed nonfiction works as The Perennial Philosophy and The Doors of Perception. Born in Surrey, England, and educated at Oxford, he died in Los Angeles, California.

Huston Smith is internationally known and revered as the premier teacher of world religions. He is the focus of a five-part PBS television series with Bill Moyers and has taught at Washington University, the Massachusetts Institute of Technology, Syracuse University, and the University of California at Berkeley. The recipient of twelve honorary degrees, Smith's fifteen books include his bestselling The World's Religions, Why Religion Matters, and his autobiography, Tales of Wonder.

“That Aldous Huxley knew the reality of God is beautifully expressed in these essays. — Jacqueline Hazard Bridgeman, from the Preface

“Altogether excellent. ... The Divine Within is an illuminating read in its totality, exploring such subjects as time, religion, distraction, death, and the nature of reality. — Maria Popova, Brain Pickings