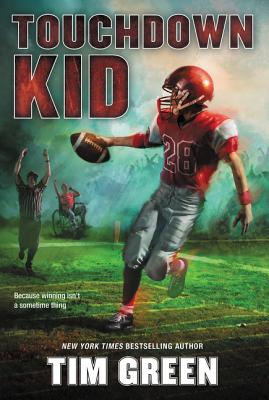 From New York Times bestselling author and former NFL defensive end Tim Green comes a football story about a boy who is given a chance to prove that wealth and privilege don’t matter on the football field, as long as he has the skills to compete. Perfect for fans of Mike Lupica!

Cory has always been passionate about football. But life for him and his single mom has been hard, making it difficult for Cory to play. And though Cory is a good kid, he’s constantly surrounded by negative influences. But when the coach from an elite private school with one of the best football programs in the country recognizes his talents on the field, Cory is presented with an unbelievable opportunity.

Cory knows that football could be his ticket out. But leaving to attend private school also means struggling to fit into a world where most people look at him and just see a scholarship kid from the wrong side of town. Cory knows that if he can fight hard enough—both on and off the field—he may be able to secure a bright future that looks different from his unpromising past.

Tim Green, for many years a star defensive end with the Atlanta Falcons, is a man of many talents. He's the author of such gripping books for adults as the New York Times bestselling The Dark Side of the Game and American Outrage. Tim graduated covaledictorian from Syracuse University and was a first-round draft pick. He later earned his law degree with honors, and he has also worked as an NFL commentator for FOX Sports and NPR.

His first book for young readers, Football Genius, inspired in part by his players and his own kids, became a New York Times bestseller and was followed by Football Hero, Football Champ, The Big Time, and Deep Zone. He drew on his experiences playing and coaching Little League for Rivals and Pinch Hit and two more New York Times bestsellers: Baseball Great and Best of the Best.

Bestselling author Jon Scieszka called Tim Green's Unstoppable, a book about a boy's struggle with cancer that debuted at #2 on the New York Times bestseller list, "Absolutely heroic. And something every guy should read."

Tim Green lives with his wife, Illyssa, and their five children in upstate New York.