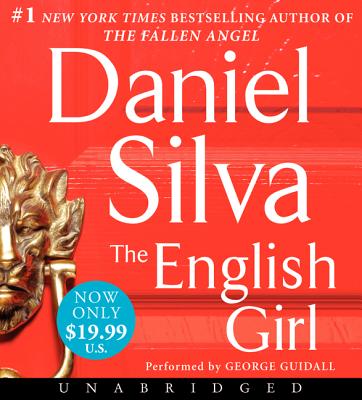 This is book number 13 in the Gabriel Allon series.

Daniel Silva delivers another spectacular thriller starring Gabriel Allon, The English Girl. When a beautiful young British woman vanishes on the island of Corsica, a prime minister’s career is threatened with destruction. Allon, the wayward son of Israeli intelligence, is thrust into a game of shadows where nothing is what it seems...and where the only thing more dangerous than his enemies might be the truth…

Silva’s work has captured the imagination of millions worldwide; his #1 New York Times bestselling series which chronicles the adventures of art-restorer and master spy Gabriel Allon has earned the praise of readers and reviewers everywhere. This captivating new page-turner from the undisputed master of spy fiction is sure to thrill new and old fans alike.

Daniel Silva is the award-winning, #1  New York Times bestselling author of The Unlikely Spy, The Mark of the Assassin, The Marching Season, The Kill Artist, The English Assassin, The Confessor, A Death in Vienna, Prince of Fire, The Messenger, The Secret Servant, Moscow Rules, The Defector, The Rembrandt Affair, Portrait of a Spy, The Fallen Angel, The English Girl, The Heist, The English Spy, The Black Widow, House of Spies, The Other Woman, The New Girl, and The Order.  He is best known for his long-running thriller series starring spy and art restorer Gabriel Allon. Silva’s books are critically acclaimed bestsellers around the world and have been translated into more than 30 languages. He resides in Florida with his wife, television journalist Jamie Gangel, and their twins, Lily and Nicholas. For more information visit www.danielsilvabooks.com

George Guidall is one of the foremost narrators in the audiobook industry, having recorded over 500 unabridged books ranging from classics to contemporary bestsellers. He is the recipient of the 1999 Audie Award presented by the Audio Publishers Association for the best narration of unabridged fiction.