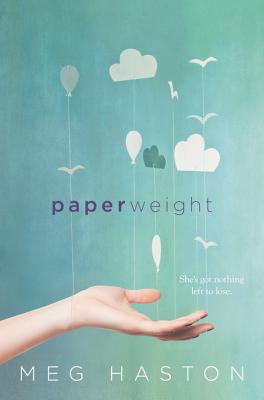 This emotionally haunting and beautifully written young adult debut delves into the devastating impact of trauma and loss, in the vein of Laurie Halse Anderson’s Wintergirls.

Seventeen-year-old Stevie is trapped. In her life. In her body. And now in an eating-disorder treatment center on the dusty outskirts of the New Mexico desert.

Life in the center is regimented and intrusive, a nightmare come true. Nurses and therapists watch Stevie at meal time, accompany her to the bathroom, and challenge her to eat the foods she’s worked so hard to avoid.

Paperweight follows seventeen-year-old Stevie’s journey as she struggles not only with a life-threatening eating disorder, but with the question of whether she can ever find absolution for the mistakes of her past…and whether she truly deserves to.

Meg Haston is the author of How to Rock Braces and Glasses and How to Rock Best Friends and Frenemies. She lives in Jacksonville, Florida, where she writes and works as a counselor in an independent school. Paperweight is her first young adult novel.

★ “Haston’s contribution to the genre stands out for the complexity of its characters and for small, telling details that demonstrate just how difficult recovery can be.” — Publishers Weekly (starred review)

“A carefully constructed buildup still lends to a quick read, which is hard to put down.” — School Library Journal

“Haunting yet hopeful, this book offers a realistic portrayal of eating disorders, guilt, and anxiety.” — Brightly