A Sitting in St. James (Paperback) 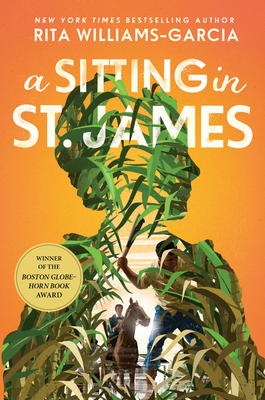 A Sitting in St. James (Paperback)

“Rita Williams-Garcia immerses the reader in pre-Civil War life in Louisiana, making it impossible to ignore all the different ways that white people of all social classes exerted their power over enslaved people. Williams-Garcia explores the ties between France, the United States and Haiti, the complex position of descendants of both the enslaved and the slave owners and the ways that white people justified their atrocities. The author's note and other back matter go into detail about the research and writing process and add more layers to the narrative. A book that will stay with you long after you finish the final page.”
— Cecilia Cackley, East City Bookshop, Washington, DC

This astonishing novel from three-time National Book Award finalist Rita Williams-Garcia about the interwoven lives of those bound to a plantation in antebellum America is an epic masterwork—empathetic, brutal, and entirely human—and essential reading for both teens and adults grappling with the long history of American racism.

1860, Louisiana. After serving as mistress of Le Petit Cottage for more than six decades, Madame Sylvie Guilbert has decided, in spite of her family’s objections, to sit for a portrait.

While Madame plots her last hurrah, stories that span generations—from the big house to out in the fields—of routine horrors, secrets buried as deep as the family fortune, and the tangled bonds of descendants and enslaved, come to light to reveal a true portrait of the Guilberts.

Rita Williams-Garcia's Newbery Honor Book, One Crazy Summer, was a winner of the Coretta Scott King Author Award, a National Book Award finalist, the recipient of the Scott O’Dell Award for Historical Fiction, and a New York Times bestseller. The two sequels, P.S. Be Eleven and Gone Crazy in Alabama, were both Coretta Scott King Author Award winners and ALA Notable Children’s Books. Her novel Clayton Byrd Goes Underground was a National Book Award finalist and winner of the NAACP Image Award for Youth/Teen Literature. Rita is also the author of five other distinguished novels for young adults: Jumped, a National Book Award finalist; No Laughter Here, Every Time a Rainbow Dies (a Publishers Weekly Best Children’s Book), Fast Talk on a Slow Track (all ALA Best Books for Young Adults); and Blue Tights. Rita Williams-Garcia lives in Jamaica, New York, with her husband and has two adult daughters. You can visit her online at www.ritawg.com.

"Equal parts history and tantalizing, chaotic drama, Williams-Garcia's stunning novel delivers a fresh and nuanced approach to the tale of American slavery... Best-selling, award-winning Williams-Garcia's return to YA, particularly with a book as monumental as this, is definite cause for celebration." — Booklist (starred review)

"With a cast of characters whose assorted genealogies feel like an ode to the mixing of peoples and cultures in Louisiana, this story broadens and emboldens interrogations of U.S. chattel slavery... A marathon masterpiece that shares a holistic portrait of U.S. history that must not be dismissed or forgotten." — Kirkus Reviews (starred review)

"In this sweeping, richly researched, and powerfully delivered tale of privilege and exploitation—often a difficult read—Williams-Garcia’s storytelling is magnificent; her voice honest and authentic." — Horn Book (starred review)

"This is a wonderful character-driven novel as stories of the enslaved and the slaveowners are simultaneously told... This novel is a necessary purchase for conversations about ­slavery’s legacy in the Black Lives Matter era." — School Library Journal (starred review)

"The masterful Rita Williams-Garcia depicts the brutality and inhumanity of slavery in the antebellum South by intertwining the lives of the white Guilbert family and the Black people they enslaved in this shocking and dramatic novel." — Shelf Awareness (starred review)

“A Sitting in St. James is a mesmerizing, confounding and vividly rendered portrait of the thoroughly putrid institution of slavery in antebellum Louisiana.” — BookPage (starred review)

"Offers an unvarnished look at a slowly toppling power structure obsessed with artifice and tradition, hinting through a notably long-view lens that new generations may, slowly and not without suffering, move away from antiquated ideology." — Publishers Weekly

"Williams-Garcia is chessmaster of a deviously intricate game; Madame Sylvie may make the boldest moves, but it’s her hobbled pawn, the near-silent servant Thisbe, who listens, observes, learns, and amasses the knowledge to strike the queen with a coup de grâce." — Bulletin of the Center for Children’s Books