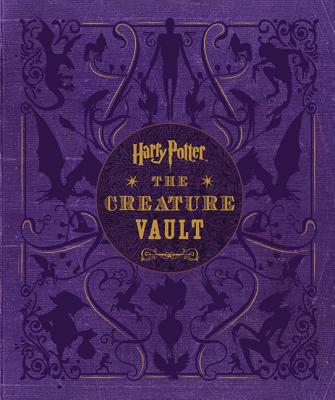 Dementors and House-elves, merpeople and Chinese Fireball Dragons—these are just a few of the magical creatures and frightening monsters populating J. K. Rowling's wizarding world. Harry Potter: The Creature Vault is a fascinating look at how this menagerie was brought to life for the blockbuster Harry Potter film series. Detailed profiles of each creature include rare concept illustrations, behind-the-scenes photography, and filmmaking secrets from the Warner Bros. archive. A removable poster picturing each of the creatures and an interactive Eeylops Owl Emporium catalog complete this must-have package.

“It’s the kind of trivia only a true fan would know, and since it comes packaged in beautiful purple binding, it’s sure to make other muggles quake with envy.”
— MoviePilot.com

“If you are a fan of the films, and are looking for more details, insider information, and sketches galore, then this is the book for you and...a must have.”
— Mugglenet.com

“...this coffee-table tome is a comprehensive and delightful look at the memorable creatures that populate the magical world... A true collector’s edition...”
— Examiner.com

“...Revenson is one of the few—outside of perhaps Rowling herself—who is paid to know every twist, turn, first appearance, second appearance, elbow shape and snout color for every beast that has ever appeared in the Harry Potter movie series.”
— Chicago Sun-Times

“...[the] book collects some of the most breathtaking concept art we’ve seen in ages of dragons and other magnificent creatures, from the Harry Potter movies.”
— io9.com

“Harry Potter: The Creature Vault is a fascinating look at how this menagerie was brought to life for the blockbuster Harry Potter film series.”
— Hypable.com

“VERDICT Visually stimulating and comprehensive, this volume is a much welcome addition to the Potter collection.”
— Library Journal

“The original Harry Potter sketches are all kinds of creepy, fuzzy and awesome.”
— Hello Giggles

“...Harper Collins...released a new book featuring the astounding original concept art for many of the creepy-crawly (and cute and fluffy) creatures from the books.”
— PopSugar

“...gives readers a peek at how artists brought those creatures to the screen.”
— Mashable