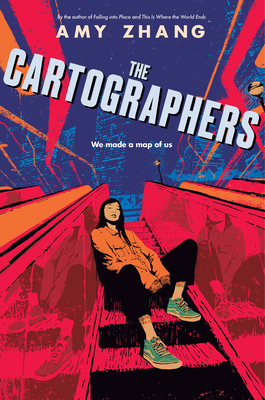 Struggling to balance the expectations of her immigrant mother with her own deep ambivalence about her place in the world, seventeen-year-old Ocean Sun takes her savings and goes off the grid. A haunting and romantic novel about family, friendship, philosophy, fitting in, and love from Amy Zhang, the acclaimed author of Falling into Place and This Is Where the World Ends.

Ocean Sun has always felt an enormous pressure to succeed. After struggling with depression during her senior year of high school, Ocean moves to New York City, where she has been accepted at a prestigious university. But Ocean feels so emotionally raw and unmoored (and uncertain about what is real and what is not) that she decides to defer and live off her savings until she can get herself together. She also decides not to tell her mother (whom she loves very much but doesn’t want to disappoint) that she is deferring—at least until she absolutely must.

In New York, Ocean moves into an apartment with Georgie and Tashya, two strangers who soon become friends, and gets a job tutoring. She also meets a boy—Constantine Brave (a name that makes her laugh)—late one night on the subway. Constant is a fellow student and a graffiti artist, and Constant and Ocean soon start corresponding via Google Docs—they discuss physics, philosophy, art, literature, and love. But everything falls apart when Ocean goes home for Thanksgiving, Constant reveals his true character, Georgie and Tashya break up, and the police get involved.

Ocean, Constant, Georgie, and Tashya are all cartographers—mapping out their futures, their dreams, and their paths toward adulthood in this stunning and heartbreaking novel about finding the strength to control your own destiny. For fans of Nina LaCour’s We Are Okay and Daniel Nayeri’s Everything Sad Is Untrue.

Amy Zhang was born in China and moved to the United States when she was a young girl. She grew up in Wisconsin and recently graduated from college. She is the author of Falling into Place and This is Where the World Ends, and she currently lives in Brooklyn, New York.

“This arresting, heartbreaking, and meditative novel examines the desperation of anxiety and shows how, though difficult, gaining control of one’s life can lead both to living one’s best life and living life the best one can.” — Booklist (starred review)

“A 17-year-old girl struggles through emotional and philosophical quandaries in New York City. . . . As Ocean is drawn closer to Constant, her own thoughts on life, reality, dying, the self, and language clash with his, creating an intriguing dynamic and a twist on the typical romance arc. Ocean’s original narration and worldview are immersive and sympathetic . . . A satisfying story arc exploring relationships with the self and others.” — Kirkus Reviews