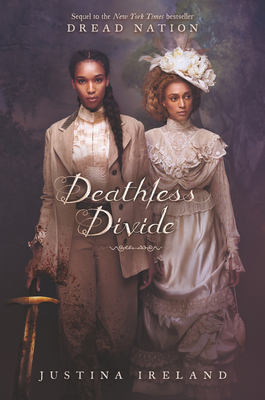 The sequel to the New York Times bestselling epic Dread Nation is an unforgettable journey of revenge and salvation across a divided America.

After the fall of Summerland, Jane McKeene hoped her life would get simpler: Get out of town, stay alive, and head west to California to find her mother.

But nothing is easy when you’re a girl trained in putting down the restless dead, and a devastating loss on the road to a protected village called Nicodemus has Jane questioning everything she thought she knew about surviving in 1880s America.

What’s more, this safe haven is not what it appears—as Jane discovers when she sees familiar faces from Summerland amid this new society. Caught between mysteries and lies, the undead, and her own inner demons, Jane soon finds herself on a dark path of blood and violence that threatens to consume her.

But she won’t be in it alone.

Katherine Deveraux never expected to be allied with Jane McKeene. But after the hell she has endured, she knows friends are hard to come by—and that Jane needs her too, whether Jane wants to admit it or not.

Watching Jane’s back, however, is more than she bargained for, and when they both reach a breaking point, it’s up to Katherine to keep hope alive—even as she begins to fear that there is no happily-ever-after for girls like her.

Justina Ireland is the New York Times bestselling author of Dread Nation and its sequel, Deathless Divide, as well as Vengeance Bound and Promise of Shadows. She is also one of the authors creating the next generation of Star Wars novels entitled the High Republic and is the author of the middle grade Star Wars adventures Lando’s Luck, Spark the Resistance, and A Test of Courage. She lives with her family in Maryland, where she enjoys dark chocolate and dark humor and is not too proud to admit that she’s still afraid of the dark. You can visit her online at www.justinaireland.com.

"At its core the book delves into a spectrum of black girls' and women's experiences, kinship, and necessary resilience. The imaginative integration of real-world historical players into an equally messy, gruesome chronology artfully developed by the author makes this stand out.A seriously satisfying, worthy, and well-crafted sequel." — Kirkus Reviews (starred review)

"Irascible Jane McKeene and posh Katherine Deveraux, zombie-dispatching graduates of Miss Preston’s School of Combat for Negro Girls, are back in this suspenseful, satisfying sequel to Dread Nation. Ireland threads her thrilling plot with incisive commentary about race, gender, and power that will appeal to today’s activist teen readers." — The Horn Book

"Shambler attacks, narrow escapes, and heartbreaking decisions keep the pace riding high in the first part, but the transition to the girls’ separate journeys west pulls in the reins, giving thoughtful consideration to the layers of racism and oppression that continue to plague a society already literally plagued by the past." — Bulletin of the Center for Children’s Books