How Not to Get Shot: And Other Advice From White People (Hardcover) 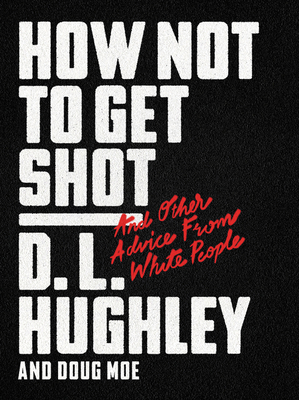 The fearless comedy legend—one of the “Original Kings of Comedy”—hilariously breaks down the wisdom of white people, advice that has been killing black folks in America for four hundred years and counting.

200 years ago, white people told black folks, “‘I suggest you pick the cotton if you don’t like getting whipped.” Today, it’s “comply with police orders if you don’t want to get shot.” Now comedian/activist D. L. Hughley–one the Original Kings of Comedy–confronts and remixes white people’s “advice” in this “hilarious examination of the current state of race relations in the United States” (Publishers Weekly).

In America, a black man is three times more likely to be killed in encounters with police than a white guy. If only he had complied with the cop, he might be alive today, pundits say in the aftermath of the latest shooting of an unarmed black man. Or, Maybe he shouldn’t have worn that hoodie … or, moved more slowly … not been out so late … Wait, why are black people allowed to drive, anyway?

This isn’t a new phenomenon. White people have been giving “advice” to black folks for as long as anyone can remember, telling them how to pick cotton, where to sit on a bus, what neighborhood to live in, when they can vote, and how to wear our pants. Despite centuries of whites’ advice, it seems black people still aren’t listening, and the results are tragic.

Now, at last, activist, comedian, and New York Times bestselling author D. L. Hughley offers How Not to Get Shot, an illustrated how-to guide for black people, full of insight from white people, translated by one of the funniest black dudes on the planet. In these pages you will learn how to act, dress, speak, walk, and drive in the safest manner possible. You also will finally understand the white mind. It is a book that can save lives. Or at least laugh through the pain.

Black people: Are you ready to not get shot! White people: Do you want to learn how to help the cause? Let’s go!

D.L. Hughley is one of “The Original Kings of Comedy.” He hosts the national radio program The D.L. Hughley Show, which is syndicated in more than sixty markets. His comedy specials have appeared on HBO, Netflix, Comedy Central, and Showtime. His satirical documentary special, DL Hughley: The Endangered List, received the prestigious George Foster Peabody Award. He created and starred in the ABC sitcom The Hughleys. He is the author of the New York Times bestsellers How Not to Get Shot and Black Man, White House. How Not to Get Shot was selected as a finalist for the Goodreads Choice Awards and the Audie Awards. D.L. lives with his family in Los Angeles, California.

Doug Moe is the co-author of two books for D.L. Hughley: “Surrender, White People!: Our Unconditional Terms for Peace” and the New York Times Bestseller “How Not to Get Shot: And Other Advice From White People” (“A satirical but apt addition to the culture’s fraught conversation about race.” - New York Times Book Review).  His book “Man Vs Child: One Dad’s Guide to the Weirdness of Parenting” was named one of Amazon’s Best Humor Books of 2017.  He’s a longtime performer and instructor at the Upright Citizens Brigade Theatre. On TV, you've maybe seen me in "Inside Amy Schumer," "30 Rock" or "Difficult People," among other places.

“In his hilarious yet soul-shaking truth-telling book, Hughley touches on politics, race, and life as a black American as only he can.” — Black Enterprise, A “MUST-READ BOOK FOR 2019”

“Hilarious. … It might be the most important book you buy this year.” — Philadelphia Tribune

“Hughley pulls no punches in this caustic, maddening, and hilarious examination of the current state of race relations in the United States.” — Publishers Weekly

“A biting satire about racism. ... A sharp-tongued truth-teller.” — Huffington Post