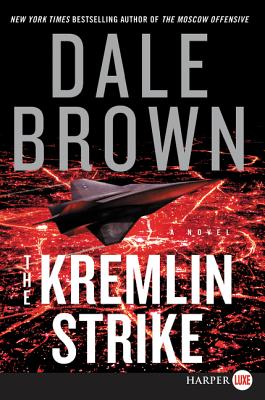 In this exciting, visionary, and all-too-plausible next chapter in the legendary Dale Brown’s New York Times bestselling techno-warfare series, Brad McLanahan and the Iron Wolf Squadron must fight the Russians on a dangerous, untested battlefield: outer space.

The previous administration’s ineffective response to the growing Russian threat has left America vulnerable. Setting a bold course for America’s defense, the decisive and strong new president, John Dalton Farrell, intends to challenge Russian aggression head on. Brad and Patrick McLanahan and the formidable Iron Wolf Squadron—including the recently injured Nadia Rozek, rested and back to fighting form thanks to a pair of state-of-the-art prosthetic legs—are ready and eager to join the battle.

But even with their combined forces, the Russian menace may prove too great for the Americans to overcome. Done with provocative skirmishes and playing for small stakes, the Russian president has set his sights on the ultimate prize: controlling the entire world. Expanding beyond earth’s bounds, the Russians have built a new high-tech space station and armed it with weaponry capable of destroying US satellites as well as powerful missiles pointed at strategic targets across earth.

Devising a cunning plan of attack, Brad, Nadia, and the Iron Wolf warriors will take to the skies in their advanced space planes to destroy the space station, check the Russians’ plan for dominance, and save the world. But is it already too late?

Praise for The Kremlin Strike: “Brown’s look at the future of the military and potential conflicts with new technology and warfare continues to be engaging.… Fans who have grown fond of Patrick and his team will love this latest installment.” — Booklist

“This action-packed techno-thriller is filled with enough complex aerospace and aeronautical jargon to sizzle the senses.... A well-researched and fast-paced story that provides all the requisite sparks to keep the pages turning.” — Kirkus Reviews

“An off-the-books mercenary unit is the world’s best bet against unchecked Russian aggression.… A fun read that really shines with the author’s convincing knowledge of military aircraft.” — Kirkus Reviews

“The combat scenes stand out… Brown reinforces his position at the top of the military action genre.” — Publishers Weekly

“Strap in, for there are shootouts on every page plus a well-choreographed climactic raid. ... A compelling, fast-paced, and imaginative techno-thriller. ... There’s so much action here it’s a wonder there aren’t bullet holes and bomb craters on every page.” — Kirkus Reviews on Price of Duty

“Fans will find Brown in fine form here, and newcomers who enjoy top-notch military fiction will have no trouble diving into the deep end.” — Booklist on Price of Duty

“All too real and eerily authentic. One of the godfathers of techno-thrillers, Brown has saved some of his best and most creative story ideas for [Price of Duty].” — TheREALBookSpy