Hero Dinners: Complete One-Pan Meals That Save the Day (Hardcover) 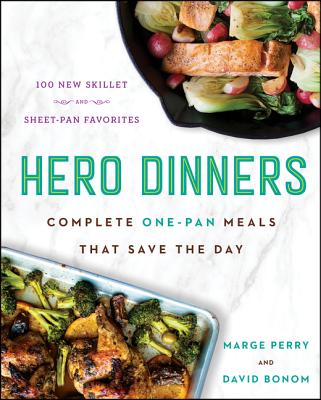 An NPR Best Book of the Year

A one-stop resource for amazingly delicious complete meals made in just a single skillet or sheet pan, created by the food-world favorite husband-and-wife team who develop recipes for all the major magazines.

Even if you love to cook, the last thing you want to do at the end of a long day is wash a sink full of pots and pans. Hero Dinners gives you the superpower to make delicious, well-balanced meals using fresh, wholesome ingredients—all in just one sheetpan or skillet. The wizardry behind these complete meals is in super smart, innovative—and simple!—techniques that ensure you won’t end up with muddled flavors and textures. With these inventive recipes, you’ll maximize the impact of each and every ingredient and flavor. And every recipe truly makes a complete meal, including protein and a vegetable or grain—and usually both.

In clear, easy-to-follow instructions, cooking experts Marge Perry and David Bonom show you how to magically elevate commonplace ingredients into delicious meals you’ll make again and again. Sometimes the “magic” lies in respecting the inherently good flavors of the ingredients, as in bronzino roasted with orange slices, drizzled with a simple caper vinaigrette and accompanied by crisp roast potato slices layered with tomato and fennel. Other times, savvy use of interesting condiments, such as Moroccan harissa paste or pomegranate molasses, lend robust flavor with very little work.

Hero Dinners includes 100 one-pan meals you can feel good about eating and feeding to your family, including:

A mouthwatering color photo accompanies every recipe, and the book is peppered with dozens of incredibly useful tip boxes to help cooks shave time or calories; learn about ingredients and substitutions; and get even more efficient in the kitchen. Hero Dinners is your powerful everyday mealtime solution: armed with the recipes in this book, you truly do make Hero Dinners.

Marge Perry and David Bonom are the owners of Vittles & Verbs, a company that provides food content to companies of all sizes. Their recipes are mainstays in magazines, books, websites, and they partner often with major corporations on food content.

Marge is an award-winning writer for Newsday, a health contributor for Rachael Ray Every Day, a health columnist for AllRecipes magazine, and owner of the blog A Sweet and Savory Life. Her work has appeared regularly in the New York Times, Cooking Light, Eating Well, Self, Better Homes and Gardens, Fine Cooking, Coastal Living, Health, and Prevention (to name a few). She is a chef-instructor at Institute of Culinary Education and teaches food writing at New York University.

David started his culinary career at Union Square Café and earned his prestigious CCP (Certified Culinary Professional) designation just five years later. After cooking for such notable clients at the Tisch family, Bette Midler, (then) First Lady Hillary Clinton, and Sotheby’s, David served as test kitchen director for a number of publications. He has contributed to most of the Weber grilling cookbooks in the last decade or so, and too many Weight Watchers cookbooks to count. His recipes appear regularly in Rachael Ray Every Day, Cooking Light, Better Homes and Gardens, Eating Well, Fine Cooking, and many other magazines.

[Perry and Bonom's] one-pan wonders will be greeted with equal delight by cook and dishwasher (doubly so if you are both). Go ahead and pile cod, potatoes and green beans onto a baking sheet and call it “New England fish dinner”! Who says you can’t cook rice in the oven, right underneath your hoisin-marmalade chicken? I vote this one “Most Likely to Supplant Your Meal Subscription Box.”
— NPR Books

“Recipes deliver on the qualifications for ‘hero dinners’: balanced, whole food dishes that don’t require obscure or elaborate ingredients or techniques…The authors provide shortcuts, such as using cooked frozen rice, as well as guidance for how to read a recipe, essential information for novice or infrequent cooks.”
— Library Journal

“Adding salmon to a BLT is not a new idea, but I had never tried it at home . . . This one has the benefit of being engineered by smart kitchen folk, namely cookbook authors Marge Perry and David Bonom.”
— Washington Post

“The recipes in Hero Dinners explore a world of flavors but are easy enough for anyone to do anywhere.”
— David Lebovitz, author of My Paris Kitchen and The Perfect Scoop

“A genius book from two of my favorite cooks based on just two pieces of cookware, Hero Dinners makes getting a tasty dinner on the table every night of the week a complete no-brainer.”
— Sara Moulton, host of Sara’s Weeknight Meals on public television

Perry and Bonom's recipes are clear, concise and easy to follow; there's no guesswork. These are recipes designed for a home cook, recipes you'll find yourself using again and again.
— Barbara Revsine for Chicagonow.com

[Perry and Bonom's] recipes will make you rethink everything you thought about meal preparation.
— Margaret McSweeney for KitchenChat

[There are] loads of useful shortcuts and tidbits throughout the book. . . . Many of these recipes, once you make them, are easy and forgiving enough that you can tweak and execute them again and again from memory and/or according to your own tastes.
— Carrie Havranek for Simply Recipes