Say Yes to the Duke: The Wildes of Lindow Castle (Mass Market) 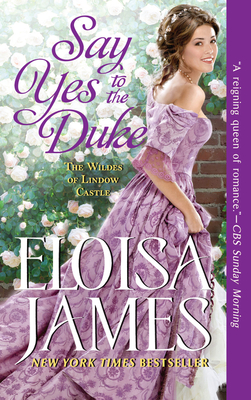 This is book number 5 in the The Wildes of Lindow Castle series.

Miss Viola Astley is so painfully shy that she’s horrified by the mere idea of dancing with a stranger; her upcoming London debut feels like a nightmare.

So she’s overjoyed to meet handsome, quiet vicar with no interest in polite society — but just when she catches his attention, her reputation is compromised by a duke.

Devin Lucas Augustus Elstan, Duke of Wynter, will stop at nothing to marry Viola, including marrying a woman whom he believes to be in love with another man.

A vicar, no less.

Viola has already said Yes to his proposal, but now he wants her unruly heart…and he won’t accept No for an answer.

“A very good (historical romance)…Devin starts out as your standard coldhearted duke, so it’s lovely when he’s the first to fall in love.” — New York Times Book Review

"James delivers all the banter and sizzle her fans expect in the nuanced fifth Wildes of Lindow Castle Georgian romance...Series readers will be pleased." — Publishers Weekly

"RITA Award–winning and best-selling James continues her winsomely winning literary streak with another brilliantly conceived and beautifully executed addition in her Wildes of Lindow Castle series. Once again, James expertly calibrates the perfect ratio of exuberant wit to elegant sensuality, and the end result is a romance worth celebrating." — Booklist (starred review)

"SAY YES TO THE DUKE was another great title in the Wildes of Lindow Castle series." — Fresh Fiction