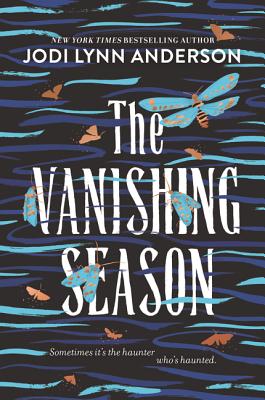 That plan changes as soon as she meets Pauline and Liam. Soon the three are inseparable, stretching out the love between two childhood best friends to fit over all of them and all their grand dreams.

But what starts as an uneventful year suddenly changes. Someone is killing teenage girls, and the town reels from each new tragedy. And as the dynamics between Maggie, Pauline, and Liam shift and collide in irreversible ways, they all will experience love and loss hand-in-hand—but only two of them will survive the winter.

Jodi Lynn Anderson is the New York Times bestselling author of Peaches, Tiger Lily, and the popular May Bird trilogy. She lives in Asheville, N.C., with her husband, her son, and an endless parade of stray pets.

Praise for THE VANISHING SEASON: “Anderson once again works her magic to conjure evocative settings and soulful protagonists in this modern gothic romance. This tantalizing novel offers a singular perspective on a complicated love triangle and a tragedy.” — Publishers Weekly (starred review)

Praise for THE VANISHING SEASON: “For readers who savor the ambiguities of unrequited love and the greys of the here and hereafter, The Vanishing Season will end well.” — Voice of Youth Advocates (VOYA)

Praise for THE VANISHING SEASON: “A heartbreaking story full of mystery, love, redemption, and betrayal. The subtle writing draws the reader in from the beginning, while the complex and intriguing characters beautifully drive the measured pacing of the plot…Coupled with a startling conclusion that make this such a powerful read.” — School Library Journal (starred review)

Praise for THE VANISHING SEASON: “This is a book to be read twice through, once for the sweetly tragic love story and mystery, and a second time for the subtle imagery and metaphorical connections.” — Bulletin of the Center for Children’s Books (starred review)

Praise for THE VANISHING SEASON: “Readers who like their romances tragic and dreamy should dive in.” — Booklist

Praise for TIGER LILY: “The mythology of Neverland is eloquently woven into the story, and characters are reborn in fascinating ways…Readers will find it hard to resist being drawn into Tiger Lily’s world, where dangers and emotions are painted several shades darker than in J.M. Barrie’s classic fantasy.” — Publishers Weekly (starred review)

Praise for TIGER LILY: “Its many layers create a place of dangerous wonder. Tiger Lily has been reinvented with a complex backstory, giving her a credible source of deep strength and dark emotion.” — School Library Journal (starred review)

Praise for TIGER LILY: “Serious and moving.” — Bulletin of the Center for Children’s Books (starred review)

Praise for TIGER LILY: “This unique retelling of PETER PAN by J. M. Barrie has a literary feel, lush descriptions, and a mysterious but sympathetic main character…A sophisticated fantasy, a new spin on a classic tale.” — Voice of Youth Advocates (VOYA)

Praise for TIGER LILY: “In expressive, graceful language, Anderson tells the story of the fierce Tiger Lily and her thorny romance with the legendary Peter Pan. Its sensitive, passionate portrayal of familiar characters…is captivating.” — Booklist

Praise for TIGER LILY: “With this quiet and bittersweet story, readers will never again think of Peter Pan as simple animation.” — BookPage

Praise for PEACHES: “A novel about broken hearts, broken spirits and the healing power of friendship. Anderson’s tale encapsulates the state of ennui and anticipation that accompanies the last stretch of adolescence.” — Publishers Weekly (starred review)