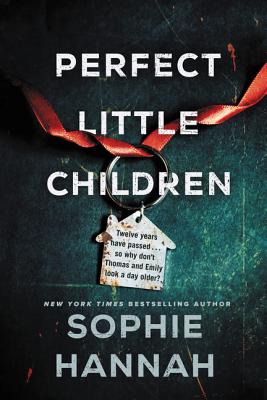 The New York Times bestselling author of The Monogram Murders and Woman with a Secret returns with a sharp, captivating, and expertly plotted tale of psychological suspense.

All Beth has to do is drive her son to his soccer game, watch him play, and then return home. Just because she knows her ex-best friend lives near the field, that doesn’t mean she has to drive past her house and try to catch a glimpse of her.

Why would Beth do that and risk dredging up painful memories? She hasn’t seen Flora for twelve years. She doesn’t want to see her today—or ever again. But she can’t resist. She parks outside the open gates of Newnham House, watches from across the road as Flora arrives and calls to her children Thomas and Emily to get out of the car.

SOPHIE HANNAH is the New York Times bestselling author of numerous psychological thrillers, which have been published in 51 countries and adapted for television, as well as The Monogram Murders, the first Hercule Poirot novel authorized by the estate of Agatha Christie, and its sequels Closed Casket, The Mystery of Three Quarters, and The Killings at Kingfisher Hill. Sophie is also the author of a self-help book, How to Hold a Grudge, and hosts the podcast of the same name. She lives in Cambridge, UK.

“Sophie Hannah, who can twist a conventional plot until it screams for mercy, puts an existential spin on the domestic suspense novel with PERFECT LITTLE CHILDREN.”
— New York Times Book Review

"Hannah builds on her suspenseful premise with well-placed clues and a superb sense of timing, all the way to a crash-and-burn ending.”
— New York Times Book Review

“Sophie Hannah begins with an intriguing, bizarre plot, then masterfully spins a story of twists and turns.”
— Washington Independent Review of Books

“Another satisfying psycho-thriller from the queen of the genre.”
— BookPage

“Nobody tells a tale, or twists it, quite like Sophie Hannah.”
— Criminal Element

“No one writes twisted, suspenseful novels quite like Sophie Hannah.”
— Liane Moriarty