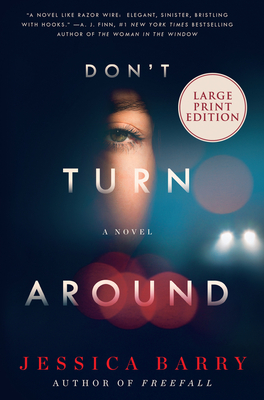 A New York Times Best Crime Novel of the Year

“Barry’s adrenaline-fueled adventure explores the Me Too movement, cancel culture, reproductive rights and white male extremism.  Buckle up for a heart-stopping ride.”--People Magazine

The riveting follow up to Jessica Barry’s debut Freefall—a controversial, of-the-moment thriller about two women fighting for their right to live.

Midnight. Cait Monaghan and Rebecca McRae are on a desolate road that slices through the New Mexican desert. They've never met before tonight.  Both have secrets to protect. Both of their lives are in danger.

When a truck pulls up fast behind them, they assume it's punk teenagers or run-of-the-mill road rage, but it soon becomes clear that whoever is driving the truck is hunting them for sport—and they are out to draw blood.

As the miles unspool and the dangers mount, the pasts they've worked so hard to keep buried have come back to haunt them.  Someone wants one of them dead. But which one?  And given the lives the two women have been leading, that someone could be almost anyone.

If Cait and Rebecca are going to survive, they'll have to learn to trust one another—and themselves. But trust is a costly business, and they’ve both paid the price before. . . .

Jessica Barry is a pseudonym for an American author who grew up in a small town in Massachusetts and was raised on a steady diet of library books and PBS.

She attended Boston University, where she majored in English and Art History, before moving to London in 2004 to pursue an MA from University College London.

She lives with her husband, Simon, and their two cats, Roger Livesey and BoJack Horseman.

“Barry’s adrenaline-fueled adventure explores the Me Too movement, cancel culture, reproductive rights and white male extremism. Buckle up for a heart-stopping ride.”
— People

“Hair-raising... Barry digs deep down into the topic of internet trolling...with a sense of awe at the level of depravity she finds on the dark web. [But] to me, the most illuminating aspect of this book is that it’s absolutely humorless. In male versions of the road-trip novel, the guys manage to have a lot of fun between the obligatory car chases [and] highway shootouts ..From the perspective of women being chased across the country by men with a vicious agenda, the open road looks a whole lot scarier — and much too scary to joke about.”
— New York Times

“A novel like razor-wire: elegant, sinister, bristling with hooks. Who is the predator — and who is the prey? Is the danger behind you, a pair of headlights on that lonely highway… or right beside you, gripping the wheel with white knuckles? As you race down the roads that slice across Jessica Barry’s American Southwest, you might catch a glimpse of the desperate fugitives from No Country for Old Men, or the wayward college kids of Joyride, — but Don’t Turn Around is very much an original vehicle, part chase thriller, part psychological suspense, altogether audacious, wholly ingenious.”
— AJ Finn, author of #1 New York Times bestseller The Woman in the Window

"Jessica Barry has written a grab-you-by-the-throat novel of suspense that follows the trail of two women pushed to the extreme. Don’t Turn Around is the female-driven thriller you've been waiting for. "
— Danielle Trussoni, New York Times bestselling author of Angelology

“Barry’s latest  is a fiercely feminine, continually tense and perfectly paced tale that simply does not let up."
— Parade

“Barry’s Freefall was one of last year’s most promising debuts, and she more than delivers with the follow-up, a riveting thriller that starts tense and never lets up. Two women meet on a semi-abandoned stretch of road in New Mexico and come to understand that the lone car there may be hunting them, and that some dark secrets may bind them together. Barry crafts a truly unsettling, powerful story.”
— Crimereads

“Barry’s electric, perfectly paced tale reads like the gritty lovechild of Thelma and Louise and Spielberg’s Duel, and readers will cheer for Cait and Rebecca all the way to the end of the road. An action-packed and fiercely feminist big-screen–ready chiller.”
— Kirkus Reviews