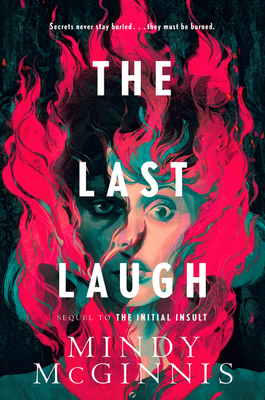 In the dark and stunning sequel to The Initial Insult, award-winning author Mindy McGinnis concludes this suspenseful YA duology as long-held family secrets finally come to light . . . changing Amontillado forevermore. Perfect for fans of Truly Devious and Sadie!

Tress Montor murdered Felicity Turnado—but she might not have to live with the guilt for long. With an infected arm held together by duct tape, the panther who clawed her open on the loose, and the whole town on the hunt for the lost homecoming queen, the odds are stacked against Tress. As her mind slides deeper into delirium, Tress is haunted by the growing sound of Felicity’s heartbeat pulsing from the “best friend” charm around her fevered neck.

Ribbit Usher has been a punchline his whole life—from his nickname to his latest turn as the unwitting star of a humiliating viral video. In the past he’s willingly played the fool, but now it’s time to fulfill his destiny. That means saving the girl, so that Felicity can take her place at his side and Ribbit can exact revenge on all who have done him wrong—which includes his cousin, Tress. Ribbit is held by a pact he made with his mother long ago, a pact that must be delivered upon in four days.

With time ticking down and an enemy she considers a friend lurking in the shadows, Tress’s grip on reality is failing. Can she keep both mind and body together long enough to finally find out what happened to her parents?

Mindy McGinnis is the author of Not a Drop to Drink and its companion, In a Handful of Dust, as well as This Darkness Mine, The Female of the Species, Given to the Sea, Heroine, and the Edgar Award–winning novel A Madness So Discreet. A graduate of Otterbein University with a BA in English literature and religion, Mindy lives in Ohio. You can visit her online at www.mindymcginnis.com.

"The overall effect this time ups the mystery, intensity, and horror (emphasis on the latter!), with a satisfying ending delivering answers about ongoing family questions and clashes. Masterfully modernizing the gothic horror genre, McGinnis outdoes herself." — Kirkus Reviews (starred review)

"A sequel that is just as thrilling and dark, if not as cohesive, as its predecessor. Definitely hand over to readers of the first book." — School Library Journal

Praise for The Initial Insult: "McGinnis draws heavily upon the works of Edgar Allan Poe to deliver a gripping modern retelling of “The Cask of Amontillado.” Tress and ­Felicity are expertly fleshed out. Their linked tragedy and trauma is expressed in prose that is by turns gritty and heart-rending, and they join a lineup of strong, flawed, and intriguing McGinnis main characters. The story ends in a cliff-hanger, which heightens anticipation for the second installment. Well-versed Poe fans will gobble this up, but the heartache, revenge, and ­anger that ooze from these pages should ­entice any reader." — School Library Journal (starred review)

"The elevator pitch is "Poe's Cask of Amontillado meets Tiger King" and that's exactly what this book delivers. McGinnis has crafted an artful tire fire that burns so bright and hot that I couldn't look away. My only complaint is the devastation I felt at the end when I realized this is the first book in a duology and I have to wait for the conclusion." — NPR Books

“If Edgar Allan Poe came back to write the scariest high school murder story ever, it probably wouldn’t be half as good as Mindy McGinnis’s The Initial Insult. You must read this book!”  — James Patterson

"Expertly crafted and absolutely chilling. Mindy McGinnis holds nothing back in this twisty, ruthlessly compelling story of a friendship gone wrong." — Karen M. McManus, #1 New York Times bestselling author of One of Us Is Lying

"Lush, dangerous, and deliciously twisty, The Initial Insult is an Appalachian Gothic for the ages. A smart and vital reworking of one of Poe's most chilling stories." — Brittany Cavallaro, New York Times bestselling author of the Charlotte Holmes series

"A wickedly disturbing and wildly entertaining tale of vengeance, guilt, and secrets. Poe enthusiasts will appreciate McGinnis’ adherence to her inspiration’s darkness." — Bulletin of the Center for Children’s Books

Praise for The Female of the Species: “[A] gripping story that should be read and discussed by teens, as well as those who work with them.” — Booklist

“Each word has been specifically chosen, each character superbly and humanly sculpted, the plot line masterfully completed. McGinnis plays with the readers and they are at her mercy.” — Voice of Youth Advocates (VOYA) (starred review)

“An unflinching look at rape culture and its repercussions.” — Kirkus Reviews (starred review)

“[I]t’s raw. Not “raw for YA.” Real-deal raw. And violent. And unforgettable. McGinnis explores both and she goes there in a way no one really has before in YA.” — Globe and Mail (Toronto)

“Your heart may still be pounding after you’ve finished this book.” — New York Times Book Review

Praise for Heroine: “[A] realistic portrayal of how easy it is to develop an opiate addiction and the very real consequences of addiction. A timely and important message for teens everywhere.” — Booklist

“A compassionate, compelling, and terrifying story about a high school softball player’s addiction to opioids. The writing is visceral, and following Mickey as she rationalizes about her addiction is educative and frightening. A cautionary tale that exposes the danger of prescription medications by humanizing one victim of America’s current epidemic.” — Kirkus Reviews (starred review)

Praise for Be Not Far from Me: "McGinnis' visceral and emotional tale features a strong, stubborn, and alarmingly capable protagonist with unwavering respect for the natural world... Impossible to put down." — Kirkus Reviews

"McGinnis is known for writing tough female protagonists and gritty realism, and she holds nothing back in this latest novel. Ashley is angry, vulnerable, smart, and compelling, and her journey is marked by setbacks, terror, and plenty of gross-out moments. This captivating, fast-paced novel is Hatchet for an older crowd. Highly recommended where adventure and survival fiction are popular." — School Library Journal

Praise for This Darkness Mine: “Rich imagery and a ruthless protagonist propel the novel forward to its shocking, ominous conclusion.” — Booklist

Praise for A Madness So Discreet: “McGinnis excels at rich character development; every person readers meet makes a dramatic impact on the story and on Grace.” — School Library Journal

Praise for Not a Drop to Drink: “The intensity of action moves the story forward, but not at the expense of character development. The honest and hopeful ending-while not ‘happily ever after’—will resonate with readers and leave them asking for more.” — Voice of Youth Advocates (VOYA)

“Those in search of fierce female survivalist characters need look no further than this.” — Booklist