Nothing to Lose: A J.P. Beaumont Novel (Hardcover) 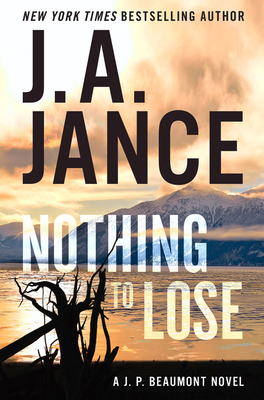 Nothing to Lose: A J.P. Beaumont Novel (Hardcover)

The newest thrilling Beaumont suspense novel from New York Times bestselling author J. A. Jance, in which Beaumont is approached by a visitor from the past and finds himself drawn into a missing person’s case where danger is lurking and family secrets are exposed.

Years ago, when he was a homicide detective with the Seattle PD, J. P. Beaumont’s partner, Sue Danielson, was murdered. Volatile and angry, Danielson’s ex-husband came after her in her home and, with nowhere else to turn, Jared, Sue’s teenage son, frantically called Beau for help. As Beau rushed to the scene, he urged Jared to grab his younger brother and flee the house. In the end, Beaumont’s plea and Jared’s quick action saved the two boys from their father’s murderous rage.

Now, almost twenty years later, Jared reappears in Beau’s life seeking his help once again—his younger brother Chris is missing. Still haunted by the events of that tragic night, Beau doesn’t hesitate to take on the case. Following a lead all the way to the wilds of wintertime Alaska, he encounters a tangled web of family secrets in which a killer with nothing to lose is waiting to take another life.

J.A. Jance is the New York Times Bestselling author of more than sixty books. Born in South Dakota and raised in Bisbee, Arizona, she and her husband live in the Seattle area with their two longhaired dachshunds, Mary and Jojo.

“J. A. does an outstanding job of delivering a very emotional book, wrapped up within a mystery that keeps the reader on edge to the very end.” — Suspense Magazine on Sins of the Fathers

“J. A. Jance is one of the best at combining mystery and family dynamics. J. P. Beaumont . . . is a character occasionally afflicted with angst, depression, and guilt, but not so much that he becomes tiresome. Rather, he becomes human, with all the temptations, missteps, failures, and ultimately successes, large and small, that most share.” — New York Journal of Books on Sins of the Fathers

“Fans of police procedurals with a Southwestern flair will love Joanna’s determination to manage marriage, motherhood, and policing in this 19th Joanna Brady book.” — Library Journal on Missing and Endangered

“The two parallel cases provide plenty of action, while keeping a premium on character studies and violence to a minimum. Once again, the compassionate, intelligent Joanna balances a busy home life and a complex job with aplomb. This long-running series consistently entertains.”  — Publishers Weekly on Missing and Endangered