Only This Beautiful Moment (Hardcover) 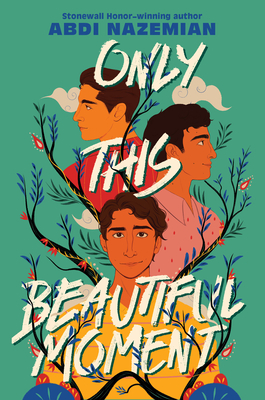 Only This Beautiful Moment (Hardcover)

From the Stonewall Honor–winning author of Like a Love Story comes a sweeping story of three generations of boys in the same Iranian family. Perfect for fans of Last Night at the Telegraph Club and Darius the Great Is Not Okay.

2019. Moud is an out gay teen living in Los Angeles with his distant father, Saeed. When Moud gets the news that his grandfather in Iran is dying, he accompanies his dad to Tehran, where the revelation of family secrets will force Moud into a new understanding of his history, his culture, and himself.

1978. Saeed is an engineering student with a promising future ahead of him in Tehran. But when his parents discover his involvement in the country’s burgeoning revolution, they send him to safety in America, a country Saeed despises. And even worse—he’s forced to live with the American grandmother he never knew existed.

1939. Bobby, the son of a calculating Hollywood stage mother, lands a coveted MGM studio contract. But the fairy-tale world of glamour he’s thrust into has a dark side.

Set against the backdrop of Tehran and Los Angeles, this tale of intergenerational trauma and love is an ode to the fragile bonds of family, the hidden secrets of history, and all the beautiful moments that make us who we are today.

Abdi Nazemian is the author of Like a Love Story, a Stonewall Honor Book, and The Authentics. His novel The Walk-In Closet won the Lambda Literary Award for LGBT Debut Fiction. His screenwriting credits include the films The Artist’s Wife, The Quiet, and Menendez: Blood Brothers and the television series The Village and Almost Family. He has been an executive producer and associate producer on numerous films, including Call Me by Your Name, Little Woods, and The House of Tomorrow. He lives in Los Angeles with his husband, their two children, and their dog, Disco. Find him online at www.abdaddy.com.

"Only This Beautiful Moment is the must-read book of 2023. Abdi Nazemian has managed to write a multi-generational story that is both universal and specific to the Iranian queer experience. I couldn't put it down. I can't stop talking about it and neither will you." — Firoozeh Dumas, New York Times bestselling author