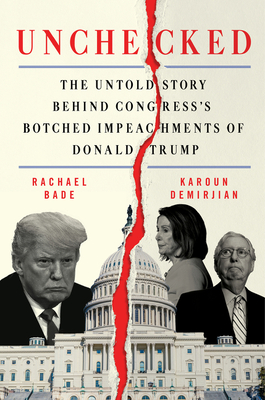 A revealing, behind-the-scenes examination of how Congress twice fumbled its best chance to hold accountable a president many considered one of the most dangerous in American history. The definitive—and only—insider account of both Trump impeachments, as told by the two reporters on the front lines covering them for The Washington Post and Politico.

In a riveting account that flips the script on what readers think they know about the two impeachments of Donald Trump, Rachael Bade and Karoun Demirjian reveal how—and why—congressional oversight failed when it was needed most.

Unchecked weaves a vivid narrative of how House Democrats under the lead of a cautious speaker, Nancy Pelosi, hesitated for months to stand up to Trump—and then pulled punches in their effort to oust him in a misguided effort to protect themselves politically. What they left on the cutting room floor would come back to haunt them, as Republicans seized on their missteps to whip an uneasy GOP rank-and-file into line behind Donald Trump, abandoning their scruples to defend a president who some privately believed had indeed abused his power.

Even after Trump incited a mob to violently attack the Capitol—a day the authors recount in minute-by-minute, stunning detail — Democrats pressured their own investigators to forego a thorough investigation in the name of safeguarding the Biden agenda. And Republicans, fearful of repelling a base they needed for re-election, missed their best moment to turn their backs on a leader they secretly agreed was destructive to democracy.

Sourced from hundreds of interviews with all the key players, the authors of Unchecked pull back the curtain on how both parties pursued political expediency over fact-finding. The end result not only emboldened Trump, giving him room for a political comeback, but also undermined Congress by rendering toothless their most powerful check on a president: the power of impeachment. A dramatic and at times crushing work of investigative reporting, Unchecked is both a gripping page-turner of political intrigue and a detailed case study for historians and political scientists searching for answers about the unravelling of checks and balances that have governed American democracy for centuries.

Rachael Bade is coauthor of POLITICO Playbook, the most renowned political newsletter tracking power and influence in Washington, D.C. Before that, she spent a decade covering Congress for both The Washington Post, where she regularly broke news on House Democrats’ oversight of the Trump administration, and POLITICO, where she chronicled Donald Trump’s takeover of the GOP. Bade is also a CNN political analyst and a frequent guest on the Sunday show circuit, with appearances on CBS’s Face the Nation, ABC’s This Week with George Stephanopoulos, and Fox News’ Fox News Sunday.

Karoun Demirjian is on the national security team at the Washington Post, where she covered intelligence, defense, and foreign policy on Capitol Hill before becoming a Pentagon correspondent. Her award-winning career has spanned three continents, including postings in the Post’s Moscow bureau, a stint in the Middle East working for the Associated Press, and over a decade covering Congress. She was a member of the Washington Post teams that won the 2022 Pulitzer Prize Gold Medal for Public Service and the 2018 Pulitzer Prize for National Reporting, and individually won or came in as runner up for the David Lynch Memorial Reporting Award for three years running as a Washington Correspondent for the Las Vegas Sun. She has been a frequent featured expert on television and radio outlets, including as a CNN political analyst.

"A timely reflection . . . a searing blow-by-blow critique . . . with lots of insider scoops along the way." — Washington Post