My Brother the Killer: A Family Story (Hardcover) 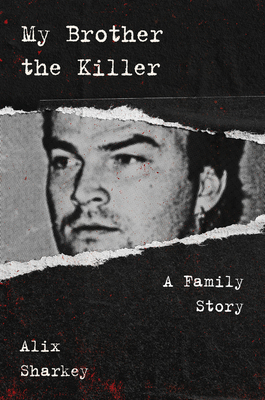 In this remarkable memoir, a harrowing true story of family, violence, guilt and atonement, a journalist reflects on his own journey to come to terms with his brother’s terrible crimes—and to find justice for the young girl he killed.

In the gritty docklands of south-east England, Alix Sharkey and his younger siblings grew up in awe of their charismatic yet violent father, a vicious alcoholic. Yet it was Alix’s kid brother Stuart—button-cute and fearless—who defended his siblings at home, at school and on the streets. Their fraternal bond was deep and powerful until Alix moved away from their rough hometown. Stuart remained—and slid into a furtive life of sexual violence against teenage girls, punctuated by prison time.

Having started out inseparable, their paths diverged radically. Alix became a journalist, cosmopolitan and bilingual, working for upmarket media in London, Paris, New York, and Los Angeles. Today, Stuart remains incarcerated in Britain’s most notorious high security prison, awaiting imminent parole. Twenty years ago, he was convicted of the kidnap and murder of his 15-year old niece Danielle, daughter of his wife’s brother. Despite his conviction, a lost appeal, and repeated pleas by her parents, Stuart has steadfastly refused to reveal the location of his victim’s remains, condemning the girl’s parents to two decades of unresolved grief.

How do two brothers choose such different paths? Could anything have prevented Stuart from becoming a killer? What factors contributed to his fall? What does Alix owe to Stuart—the fiercely protective kid brother—and what does he owe to the truth? With the clock ticking, can he convince Stuart to do the right thing and give the victim’s family the closure and peace they’ve sought for so long? Or will Stuart walk free, unrepentant and defiant?

In this piercing and unforgettable memoir, laced with bleak irony and heartrending honesty, Alix tackles these questions and confronts a harsh reality: that the younger brother he once adored not only deceived their own family for decades, but destroyed another with his truly heinous crime.

After grammar school and art school, Alix Sharkey began his writing career at i-D magazine, eventually becoming co-editor. Over more than three decades in journalism he has filed hundreds of features on crime, popular culture and fashion for the The Guardian, The Observer, The Sunday Times and The Sunday Telegraph, as well as various UK and international magazines. In 2004 he moved to Miami Beach to write about the contemporary art scene for Ocean Drive and fashion for Harper’s Bazaar. After a brief stint as a magazine editor in New York, in 2009 he relocated to Los Angeles.  He has studied creative writing at UCLA.