Three Farmers on Their Way to a Dance: A Novel (Paperback) 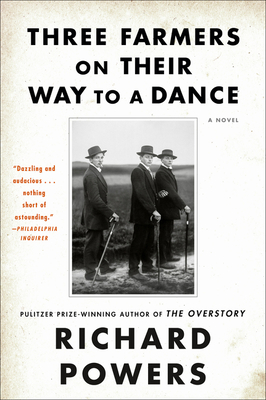 Three Farmers on Their Way to a Dance: A Novel (Paperback)

“Dazzling and audacious. . . Nothing short of astounding.” —Philadelphia Inquirer

The critically acclaimed debut novel from the Pulitzer Prize–winning author of The Overstory and the forthcoming Bewilderment.

“A writer of blistering intellect . . . [Powers is] a novelist of ideas and a novelist of witness, and in both respects, he has few American peers.” — Richard Eder, Los Angeles Times

In the spring of 1914, renowned photographer August Sander took a photograph of three young men on their way to a country dance. This haunting image, capturing the last moments of innocence on the brink of World War I, provides the central focus of Powers’s brilliant and compelling novel.

As the fate of the three farmers is chronicled, two contemporary stories unfold. The young narrator becomes obsessed with the photo, while Peter Mays, a computer writer in Boston, discovers he has a personal link with it. The three stories connect in a surprising way and offer the reader a glimpse into a mystery that spans a century of brutality and progress.

Richard Powers is the author of thirteen novels. His most recent, The Overstory, won the Pulitzer Prize in Fiction. He is also the recipient of a MacArthur Fellowship and the National Book Award, and he has been a four-time National Book Critics Circle Award finalist. He lives in the foothills of the Great Smoky Mountains.

"America's most ambitious novelist . . . No one who becomes immersed in [his] poetry will walk out the way he or she came in." — San Francisco Chronicle

"One of the few younger American writers who can stake a claim to the legacy of Pynchon, Gaddis, and DeLillo." — The Nation

"Powers hovers impossibly between extremes with a tightrope walker's perfect balance. He may be at once the smartest and the most warm-hearted novelist in America today." —  Chicago Tribune

"Powers is a genuine artist, a thinker of rare synthetic gifts, maybe the only writer working—Pynchon and DeLillo excepted—who can render the intricate dazzle of it all and at the same time plumb its philosophical implications." —  Esquire