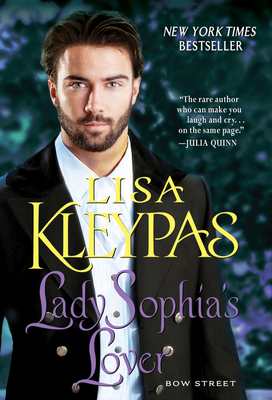 This is book number 2 in the Bow Street series.

“Kleypas is a romance gem, a queen among a vast royal court of historical romance authors.” —Entertainment Weekly

A stunning new reprint of a classic Lisa Kleypas love story about a man whos decided to forgo all romantic entanglements... until he meets a beautiful woman with a secret...

They call him the Monk of Bow Street

Sir Ross Cannon, magistrate and head of the Bow Street Runners, has spent the past few years apprehending the most dangerous criminals in London. He’s driven and disciplined, a man to be feared. His personal needs have been set aside, his days and nights consumed by the determined pursuit of justice.

Until Lady Sophia Sydney, a beautiful young woman with a tarnished past, comes to ask for employment. Ross knows a woman like Sophia doesn’t belong in the rough-and-tumble world of Bow Street, but he gives in to temptation and hires her as his assistant. Day by day the attraction between them grows, until neither of them can ignore the power of their mutual desire.

But Sophia has a secret . . . and when Ross discovers the tragic link between their pasts, any chance of being with him will vanish. All they have are a few nights of pleasure, before Sophia will be forced to leave the man she’s fallen hopelessly in love with.

What she doesn’t count on is how much Ross is willing to risk for the sake of a woman who’s awakened his heart.

“The rare author who can make you laugh and cry—on the same page.” — Julia Quinn

Kleypas continues her winning streak with a thoroughly engrossing crossover between her Regency Wallflowers series and Victorian Ravenels novels...fans of both series are sure to rejoice in the tender love story. — Publishers Weekly

“Devil in Disguise truly stands out thanks to Kleypas’ masterful blend of blazing ardor and tender yearning. Readers will bask in this lovely romance that hits every emotion just right.” — BookPage