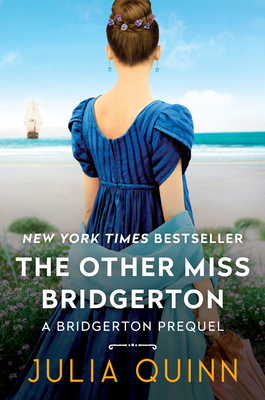 This is book number 3 in the Bridgerton Prequel series.

There were Bridgertons before the eight alphabetically named siblings. In the third of the Bridgerton Prequel series, we go back to where it all began. . . from #1 New York Times bestselling author Julia Quinn

She was in the wrong place...

Fiercely independent and adventurous, Poppy Bridgerton will only wed a suitor whose keen intellect and interests match her own. Sadly, none of the fools from her London season qualify. While visiting a friend on the Dorset coast, Poppy is pleasantly surprised to discover a smugglers’ hideaway tucked inside a cave. But her delight turns to dismay when two pirates kidnap her and take her aboard a ship, leaving her bound and gagged on the captain’s bed…

He found her at the wrong time...

Known to society as a rascal and reckless privateer, Captain Andrew James Rokesby actually transports essential goods and documents for the British government. Setting sail on a time-sensitive voyage to Portugal, he’s stunned to find a woman waiting for him in his cabin. Surely, his imagination is getting the better of him. But no, she is very real—and his duty to the Crown means he's stuck with her.

Can two wrongs make the most perfect right?

When Andrew learns that she is a Bridgerton, he knows he will likely have to wed her to avert a scandal—though Poppy has no idea that he is the son of an earl and neighbor to her aristocratic cousins in Kent. On the high seas, their war of words soon gives way to an intoxicating passion. But when Andrew’s secret is revealed, will his declaration of love be enough to capture her heart…?

“Quinn is a master of historical romance … With The Other Miss Bridgerton, Quinn has delivered another read as delightful as the malasadas her characters share here—a warm, sugary, melt-in-your-mouth confection.” — Entertainment Weekly

“Quinn’s superlative third prequel to her Bridgerton Regency series…introduces one of her most delightful couples yet…Quinn’s clever dialogue makes the characters sparkle…This is a real treat for Quinn’s fans and anyone who loves historical romance.” — Publishers Weekly (starred review)

“A risk-taking pair thrown together by chance find love on the high seas in this fast-paced, passionate adventure graced with quick-witted dialog and a marvelous sense of fun. Another worthy addition to the ever-increasing Bridgerton saga.” — Library Journal on The Other Miss Bridgerton

“Quinn’s mastery of banter, character development, and the slow build of romantic and sexual tension is on full display…compelling…Delightful and charming.” — Kirkus Reviews on The Other Miss Bridgerton