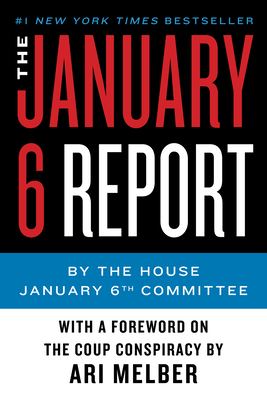 By The January 6th Committee, Ari Melber (Introduction by)
$19.99

The official report and findings of the bipartisan Congressional investigation into the January 6 attack on the Capitol, and Donald Trump’s related coup conspiracies to overthrow the election, with an original foreword by attorney and Emmy-winning MSNBC anchor Ari Melber.

Only the authoritative House committee report can capture the full range of plots that have been exposed over time, from the violent attack on January 6 to related efforts revealed months after the insurrection.

• The historic, official text of the House Committee report on the insurrection

This is the only edition of the report featuring an additional, original analysis of the coup by a journalist and lawyer at the center of the action -- Melber has interviewed top members of this Committee, Jan. 6 rally planners and other cooperating witnesses, and Trump White House veterans ranging from Steve Bannon to Peter Navarro (now indicted for defying this probe). His report documents how Trump’s plots comprise a continuous coup conspiracy -- not a “riot” that exploded in a “single day” -- and why that factual prism is vital for accountability, justice, and preventing the next coup attempt.

In chilling detail, he shows how that process might have engineered a technical effort to “override” the election on the floor of Congress—an essential map, and warning, for those who wish to protect democracy. If warnings are ignored and there is no accountability for the plotters at the top, a failed coup may become a training exercise.

This report is not only a vital document in modern American history, it can also inform efforts to protect the future of American democracy. As a matter of justice, bipartisanship, and even patriotism, this report will become essential reading for any American determined to defend our democracy.

Ari Melber is an Emmy Award-winning journalist, evening news anchor, writer and attorney. He anchors “The Beat with Ari Melber" on MSNBC, serves as the network’s Chief Legal Correspondent, and is a legal analyst for NBC News. Melber received a 2016 Emmy Award for his reporting on the Supreme Court, and was nominated for a 2020 Emmy for an “Outstanding Live Interview,” featuring four witnesses in the Mueller probe. He has been published in The New York Times, The Washington Post, The Atlantic, Politico and other publications. Melber received a J.D. from Cornell Law School, where he was an editor of the Cornell Journal of Law and Public Policy. He previously practiced First Amendment law and is a member of the New York Bar.