The Family Under the Bridge (Paperback) 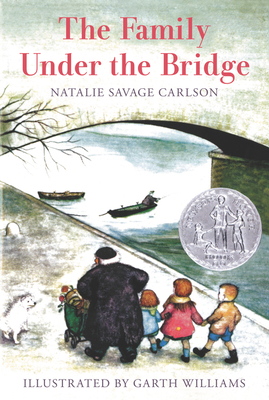 The heartwarming and memorable Newbery Honor-winning book about finding family in the unlikeliest places, featuring artwork by beloved illustrator Garth Williams. This classic middle grade novel is a welcome and meaningful read, especially at Christmastime.

Armand, an old man living on the streets of Paris, relishes his solitary life in the beautiful city. He is happy with his carefree existence, begging and doing odd jobs to keep himself warm and fed. With simple pleasures and no cares, what more could he need?

Then one day just before Christmas, Armand returns to his favorite spot beneath the bridge to find three cold and hungry children. Although he has no interest in children, Armand soon finds himself caring for the small family. It does not take Armand very long to realize that he must do whatever it takes to get them a real home.

Natalie Savage Carlson was the author of many beloved children’s books, including the Orphelines series and Surprise in the Mountains. Her first story was published in the children’s page of the Baltimore Sunday Sun when she was eight years old. She received a Newbery Honor for her novel The Family Under the Bridge.

Garth Williams is the renowned illustrator of almost one hundred books for children, including the beloved Stuart Little by E. B. White, Bedtime for Frances by Russell Hoban, and the Little House series by Laura Ingalls Wilder.

He was born in 1912 in New York City but raised in England. He founded an art school near London and served with the British Red Cross Civilian Defense during World War II. Williams worked as a portrait sculptor, art director, and magazine artist before doing his first book Stuart Little, thus beginning a long and lustrous career illustrating some of the best known children's books.

In addition to illustrating works by White and Wilder, he also illustrated George Selden’s The Cricket in Times Square and its sequels (Farrar Straus Giroux). He created the character and pictures for the first book in the Frances series by Russell Hoban (HarperCollins) and the first books in the Miss Bianca series by Margery Sharp (Little, Brown). He collaborated with Margaret Wise Brown on her Little Golden Books titles Home for a Bunny and Little Fur Family, among others, and with Jack Prelutsky on two poetry collections published by Greenwillow: Ride a Purple Pelican and Beneath a Blue Umbrella. He also wrote and illustrated seven books on his own, including Baby Farm Animals (Little Golden Books) and The Rabbits’ Wedding (HarperCollins).

“Told with warmth and humor. A charming and memorable story.” — ALA Booklist