The Descent of Man (Paperback) 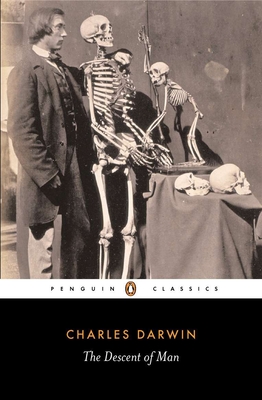 Applying his controversial theory of evolution to the origins of the human species, Charles Darwin's The Descent of Man was the culmination of his life's work.

In The Origin of Species, Charles Darwin refused to discuss human evolution, believing the subject too 'surrounded with prejudices'. He had been reworking his notes since the 1830s, but only with trepidation did he finally publish The Descent of Man in 1871. The book notoriously put apes in our family tree and made the races one family, diversified by 'sexual selection' - Darwin's provocative theory that female choice among competing males leads to diverging racial characteristics. Named by Sigmund Freud as 'one of the ten most significant books' ever written, Darwin's Descent of Man continues to shape the way we think about what it is that makes us uniquely human.

In their introduction, James Moore and Adrian Desmond, acclaimed biographers of Charles Darwin, call for a radical re-assessment of the book, arguing that its core ideas on race were fired by Darwin's hatred of slavery. The text is the second and definitive edition and this volume also contains suggestions for further reading, a chronology and biographical sketches of prominent individuals mentioned.

Charles Darwin, a Victorian scientist and naturalist, has become one of the most famous figures of science to date. Born in 1809 to an upper-middle-class medical family, he was destined for a career in either medicine or the Anglican Church. However, he never completed his medical education and his future changed entirely in 1831 when he joined HMS Beagle as a self-financing, independent naturalist. On returning to England in 1836 he began to write up his theories and observations which culminated in a series of books, most famously On the Origin of Species by Means of Natural Selection in 1859, where he challenged and contradicted contemporary biological and religious beliefs with two decades worth of scientific investigation and theory. Darwin's theory of natural selection is now the most widely accepted scientific model of how species evolve. He died in 1882 and was buried in Westminster Abbey.

Damien Hirst is an internationally renowned English artist, who has dominated the art scene in England since the 1990s. Known in particular for his series of works on death, Hirst here provides a contemporary, visual take on Darwin's theory of evolution - the struggle between life and death in nature.