The Nature of Things (Paperback) 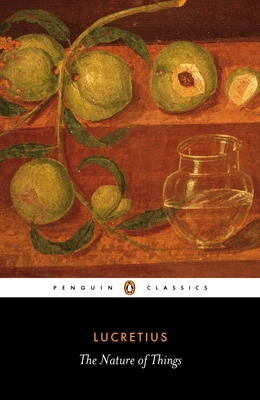 By Lucretius, A. E. Stallings (Translated by), Richard Jenkyns (Introduction by)
$16.00

“A plague . . . tests us in unique ways. . . . Only if you can face the invisible bullets all around us, and still keep calm, remain rational, and somehow find it possible to take pleasure in life, have you learned the lesson that [The Nature of Things] set out to teach.” —Stephen Greenblatt, The New Yorker

Lucretius' poem On the Nature of Things combines a scientific and philosophical treatise with some of the greatest poetry ever written. With intense moral fervour he demonstrates to humanity that in death there is nothing to fear since the soul is mortal, and the world and everything in it is governed by the mechanical laws of nature and not by gods; and that by believing this men can live in peace of mind and happiness. He bases this on the atomic theory expounded by the Greek philosopher Epicurus, and continues with an examination of sensation, sex, cosmology, meteorology, and geology, all of these subjects made more attractive by the poetry with which he illustrates them.

Titus Lucretius Carus (who died c. 50 BC) was an Epicurean poet writing in the middle years of the first century BC. His six-book Latin hexameter poem De rerum natura survives virtually intact, although it is disputed whether he lived to put the finishing touches to it. As well as being a pioneering figure in the history of philosophical poetry, Lucretius has come to be our primary source of information on Epicurean physics, the official topic of his poem.

A. E. Stallings (translator) was born in 1968. She grew up in Decatur, GA, and was educated at the University of Georgia and Oxford University in classics. Her poetry has appeared in The Best American Poetry (1994 and 2000) and has received numerous awards, including a Pushcart Prize (Pushcart Prize Anthology XXII), the 1997 Eunice Tietjens Prize from Poetry, and the third annual James Dickey Prize from Five Points.

Richard Jenkyns (introducer) is a professor of classics at the University of Oxford, a Fellow of Lady Margaret Hall, and the author of a number of books, including Dignity and Decadence: Some Classical Aspects of Victorian Art and Architecture and The Victorians and Ancient Greece.