There Once Lived a Mother Who Loved Her Children, Until They Moved Back In: Three Novellas About Family (Paperback) 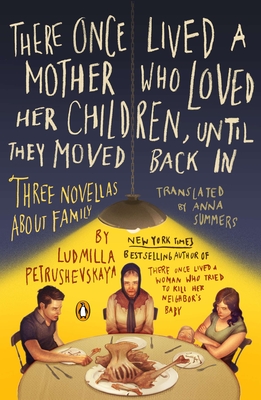 There Once Lived a Mother Who Loved Her Children, Until They Moved Back In: Three Novellas About Family (Paperback)


Email or call for price.
From the author of the prizewinning memoir about growing up in Stalinist Russia, The Girl from the Metropol Hotel, the masterly novellas that established her as one of the greatest living Russian writers—including a new translation of the modern classic The Time Is Night

“Love them,­ they’ll torture you; don’t love them, ­they’ll leave you anyway.”

After her work was suppressed for many years, Ludmilla Petrushevskaya won wide recognition for capturing the experiences of everyday Russians with profound pathos and mordant wit. Among her most famous and controversial works, these three novellas—The Time Is Night, Chocolates with Liqueur (inspired by Edgar Allan Poe’s “The Cask of Amontillado”), and Among Friends—are modern classics that breathe new life into Tolstoy’s famous dictum, “All happy families are alike; every unhappy family is unhappy in its own way.” Together they confirm the genius of an author with a gift for turning adversity into art.
Ludmilla Petrushevskaya was born in 1938 in Moscow, where she still lives. She is the author of more than fifteen volumes of prose, including the New York Times bestseller There Once Lived a Woman Who Tried to Kill Her Neighbor’s Baby: Scary Fairy Tales, which won a World Fantasy Award and was one of New York magazine’s Ten Best Books of the Year and one of NPR’s Five Best Works of Foreign Fiction; There Once Lived a Girl Who Seduced Her Sister’s Husband, and He Hanged Himself: Love Stories; and a prizewinning memoir, The Girl from the Metropol Hotel. A singular force in modern Russian fiction, she is also a playwright whose work has been staged by leading theater companies all over the world. In 2002 she received Russia’s most prestigious prize, The Triumph, for lifetime achievement.
“Masterly.” —The New York Times

“To say it stuns is an understatement. . . . Petrushevskaya’s portraits of mothers in extremis will make you reel.” —The Atlantic

“Petrushevskaya, now seventy-six and finally attracting the readership she deserves, [has] a ringleader’s calm mastery of the absurd.” —The New Yorker

“Petrushevskaya is the Tolstoy of the communal kitchen. . . . She is not, like Tolstoy, writing of war, or, like Dostoevsky, writing of criminals on the street, or, like poet Anna Akhmatova or novelist Aleksandr Solzhenitsyn, noting the extreme suffering of those sent to the camps. Rather, she is bearing witness to the fight to survive the everyday. . . . [She is] dazzlingly talented and deeply empathetic.” —Slate

“Frightening, infuriating, unforgettable . . . These novellas . . . flash into your mind, like portraits done in lightning, and then . . . they stay there.” —Minneapolis Star Tribune

“Surreal and yet strikingly direct portrayals of family life in modern Moscow . . . Brimming with black humor and bitter sparkle . . . [Petrushevskaya is] subversive and brilliant. . . . English-speaking readers are lucky to have another translation of [her] work at their disposal, and this collection will leave them eager for more.” —Shelf Awareness

“An important if disturbing work, one of the few translations available focusing on the domestic life of Soviet Russia and one of the most challenging examples of ‘women’s fiction’ available in English.” —Library Journal

“In her best work Petrushevskaya steers a sure course between neutrally recording the degraded life of the Soviet-era urban underclass and ratcheting up the squalor of that life for the mere pleasure of it. She does so by the steadiness of her moral compass and the gaiety of her prose.” —J. M. Coetzee, winner of the Nobel Prize in Literature

“We are likely to hear a lot more of this woman. Some October, perhaps, from the Nobel Prize committee.” —The Nation

“This celebrated Russian author is so disquieting that long after Solzhenitsyn had been published in the Soviet Union, her fiction was banned—even though nothing about it screams ‘political’ or ‘dissident’ or anything else. It just screams.” —Elle

“One of Russia’s best living writers . . . Her tales inhabit a borderline between this world and the next.” —The New York Times Book Review