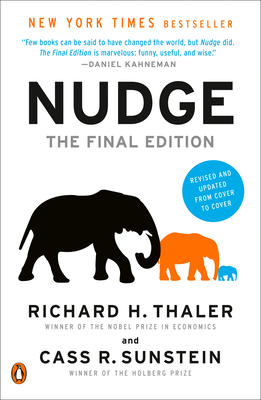 An essential new edition―revised and updated from cover to cover―of one of the most important books of the last two decades, by Nobel Prize winner Richard H. Thaler and Cass R. Sunstein

Since the original publication of Nudge more than a decade ago, the title has entered the vocabulary of businesspeople, policy makers, engaged citizens, and consumers everywhere. The book has given rise to more than 400 “nudge units” in governments around the world and countless groups of behavioral scientists in every part of the economy. It has taught us how to use thoughtful “choice architecture”—a concept the authors invented—to help us make better decisions for ourselves, our families, and our society.

Now, the authors have rewritten the book from cover to cover, making use of their experiences in and out of government over the past dozen years as well as an explosion of new research in numerous academic disciplines. To commit themselves to never undertaking this daunting task again, they are calling this the “final edition.” It offers a wealth of new insights, for both its avowed fans and newcomers to the field, about a wide variety of issues that we face in our daily lives—COVID-19, health, personal finance, retirement savings, credit card debt, home mortgages, medical care, organ donation, climate change, and “sludge” (paperwork and other nuisances we don’t want, and that keep us from getting what we do want)—all while honoring one of the cardinal rules of nudging: make it fun!
Richard H. Thaler was awarded the 2017 Nobel Memorial Prize in Economic Sciences for his contributions to the field of behavioral economics. He is the Charles R. Walgreen Distinguished Service Professor of Behavioral Science and Economics at the University of Chicago Booth School of Business. He is a member of the National Academy of Science and the American Academy of Arts and Sciences, and in 2015 he was the president of the American Economic Association. He has been published in numerous prominent journals and is the author of Misbehaving: The Making of Behavioral Economics.

Cass R. Sunstein is the Robert Walmsley University Professor at Harvard Law School, where he is the founder and director of the Program on Behavioral Economics and Public Policy. From 2009 to 2012 he served in the Obama administration as administrator of the White House Office of Information and Regulatory Affairs, from 2020 to 2021 he served as chair of the Technical Advisory Group for Behavioral Insights and Health at the World Health Organization, and in 2021 he joined the Biden administration as senior counselor and regulatory policy officer in the Department of Homeland Security. His many books include Impeachment: A Citizen's Guide, Too Much Information, and, with Daniel Kahneman and Olivier Sibony, Noise. He is the recipient of the 2018 Holberg Prize, awarded annually to a scholar who has made outstanding contributions to research in the arts, humanities, social sciences, law, or theology.
Nominated for Malcolm Gladwell, Susan Cain, Adam Grant, and Daniel H. Pink’s Next Big Idea Club

“A cultural phenomenon [that] finally brought behavioral economics into the mainstream . . . This version of the book is chock-full of new ideas. . . . Since the pandemic began, governments and companies around the world have had to think creatively about how to nudge people to wear masks, socially distance, and get vaccinated. And we’ve seen a lot of creative campaigns that adopt strategies outlined in Nudge.” ―NPR’s Planet Money

“Few books can be said to have changed the world, but Nudge did. The Final Edition is marvelous: funny, useful, and wise.” ―Daniel Kahneman, #1 New York Times bestselling author of Thinking, Fast and Slow

“Nudge should be required reading for anyone who aspires to run a country, lead a company, raise a child, or make a choice. It’s the gold standard for using behavioral science to guide decisions and policies, and the new edition is even better than the original.” ―Adam Grant, #1 New York Times bestselling author of Think Again and host of the TED podcast WorkLife

“Nudge has changed the way we think about both business’s and society’s biggest problems. The Final Edition is full of new insights and well worth reading.” ―Eric Schmidt, former CEO of Google

“We used the core principles of Nudge when designing our protocols for resuming play during the pandemic. This new edition provides a refreshed set of practical concepts and strategies to influence decision-making for good.” ―Adam Silver, NBA commissioner

“If you’ve read Nudge and think you fully grasp the concept and its uses, you are mistaken. The new edition significantly deepened my understanding of what nudges are and how they can be employed. It truly is a must-read.” ―Robert Cialdini, New York Times bestselling author of Influence

“Revolutionary. Once you’ve read it, you start seeing the evidence everywhere. Evidence that economic orthodoxy is woefully out of date, that as humans we’re not always rational, and that in every bit of architecture, design, and economic choice, we are ALWAYS being nudged in some way. Once we see and accept that, we can ask how we can make better choices. This book points us in the direction. It changes the way you see the world—this edition even more so.” ―David Byrne, musician

“In the spirit of Donald Norman’s The Design of Everyday Things . . . Thaler and Sunstein deliver a spirited argument to enable well-informed people to overcome various biases and ‘probabilistic harms’ to do what is best for them and, in the present case, their fellow ‘American Humans.’ . . . Students of design, politics, economics, and many other fields will delight in these provocative discussions.” ―Kirkus Reviews

Acclaim for the original edition of Nudge

“Nudge has changed the world. You may not realise it, but as a result of its findings you’re likely to live longer, retire richer and maybe even save other people’s lives.” —The Times (London)

“One of the few books . . . that fundamentally changed the way I think about the world.” —Steven D. Levitt, coauthor of Freakonomics

“Engaging and insightful . . . The conceptual argument is powerful, and most of the authors’ suggestions are common sense at its best. . . . For that we should all applaud loudly.” —The New York Times Book Review

“An essential read . . . The book isn’t only humorous, it’s loaded with good ideas that financial-service executives, policy makers, Wall Street mavens, and all savers can use.” —The Boston Globe

“This book is terrific. It will change the way you think, not only about the world around you and some of its bigger problems, but also about yourself.” —Michael Lewis, author of Moneyball and Liar’s Poker

“This gem of a book . . . is a must-read for anyone who wants to see both our minds and our society working better. It will improve your decisions and it will make the world a better place.” —Daniel Kahneman, Nobel Prize–winning author of Thinking, Fast and Slow

“Utterly brilliant . . . Nudge won’t nudge you—it will knock you off your feet.” —Daniel Gilbert, author of Stumbling on Happiness

“Engaging, informative, and thoroughly delightful.” —Don Norman, author of The Design of Everyday Things and The Design of Future Things

“A wonderful book: more fun than any important book has a right to be—and yet it is truly both.” —Roger Lowenstein, author of When Genius Failed

“Save the planet, save yourself. Do-gooders, policymakers, this one’s for you.” —Newsweek

“Nudge helps us understand our weaknesses, and suggests savvy ways to counter them.” —The New York Observer

“This Poor Richard’s Almanack for the 21st century . . . shares both the sagacity and the witty and accessible style of its 18th-century predecessor.” —Law and Politics Book Review

“There are superb insights in Nudge.” —Financial Times