Half Wild (The Half Bad Trilogy #2) (Paperback) 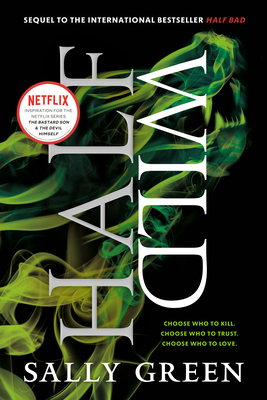 Half Wild (The Half Bad Trilogy #2) (Paperback)

This is book number 2 in the The Half Bad Trilogy series.

The second thrilling book in Sally Green's Half Bad trilogy, the inspiration for the Netflix series The Bastard Son & The Devil Himself

"An enthralling fantasy in the Harry Potter tradition."—Time magazine on Half Bad

Kept in a cage for two years by the Council of Fairborn Witches, Nathan was trained to kill his father, the most violent and feared of the Blood Witches. Now Nathan has escaped, and he dreams of a quiet life of freedom with Annalise, the girl he loves—but Annalise is a prisoner, wasting away in a deathlike sleep. Nathan’s friend, Gabriel, is missing, likely dead, and although Nathan has found his unique magical Gift, he can’t control it. The Council's Hunters are on his trail, so he is always on the run. Nathan's only hope of survival is to join with new allies and old enemies in an alliance to bring down the Council, and they want Nathan's help: they, too, want Nathan to be a killer. Maybe that is the only way out. Maybe that is just who he is now…

Set in modern-day Europe, the second book in the Half Bad trilogy is more than a story about witches. It's a heart-poundingly visceral look at survival and exploitation, the nature of good and evil, and the risks we take for love.

Now streaming on Netflix as The Bastard Son & The Devil Himself.
Sally Green lives in northwest England. She has had various jobs and even a profession, but in 2010 she discovered a love of writing and now just can't stop. She used to keep chickens, makes decent jam, doesn't mind ironing, loves to walk in Wales even when it's raining, and will probably never jog again. She really ought to drink less coffee. Sally is the author of the Half Bad trilogy and the Smoke Thieves trilogy.
Praise and accolades for Half Wild:

* "Once again, Green pushes the boundaries of definition; this time: What is wild? What is human or even civilized? The blood and gore, the willingness to endure and survive at any price, and the dichotomies between good and bad, love and hate, wild and civilized—all haunt the reader, climaxing in a tragic ending that portends the horror, violence, and possible relationships in the trilogy’s final installment." —Booklist, starred review

"Because this series has already been optioned for a movie, you better get on the books before the hype goes bananas."—Bustle

Praise and accolades for Half Bad

"This will haunt you." —Marie Lu, New York Times bestselling author of Legend