The Name Of The Rose (Hardcover) 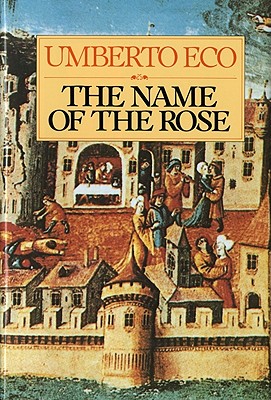 By Umberto Eco, William Weaver (Translated by)
$35.00
Email or call for price.

Now available from HarperVia in a deluxe paperback edition featuring never-before-seen illustrations by the author, the beloved internationally bestselling historical mystery about a brilliant monk called upon to solve a series of baffling murders in a fourteenth-century Italian abbey

“Explodes with pyrotechnic inventions, literally as well as figuratively. Hold on till the end.”—New York Times

“Whether you're into Sherlock Holmes, Montaillou, Borges, the nouvelle critique, the Rule of St. Benedict, metaphysics, library design, or The Thing from the Crypt, you'll love it. Who can that miss out?”—Sunday Times (London)

Italy, 1347. While Brother William of Baskerville is investigating accusations of heresy at a wealthy abbey, his inquiries are disrupted by a series of bizarre deaths. Turning his practiced detective skills to finding the killer, he relies on logic (Aristotle), theology (Thomas Aquinas), empirical insights (Roger Bacon), and his own wry humor and ferocious curiosity. With the aid of his young apprentice, William scours the abbey, from its stables to the labyrinthine library, piecing together evidence, and deciphering cryptic symbols and coded manuscripts to uncover the truth about this place where "the most interesting things happen at night."

First published in 1980, The Name of the Rose became an international sensation, beguiling readers around the world with its mix of history, humor, and intellectual heft. This beautifully designed modern edition, illustrated with exclusive original drawings created by Umberto Eco, will enchant a new generation of readers and entice old fans to fall under its spell once again.

UMBERTO ECO (1932–2016) was the author of numerous essay collections and seven novels, including The Name of the Rose,The Prague Cemetery, and Inventing the Enemy. He received Italy’s highest literary award, the Premio Strega, was named a Chevalier de la Légion d’Honneur by the French government, and was an honorary member of the American Academy of Arts and Letters.

“Explodes with pyrotechnic inventions, literally as well as figuratively. Hold on till the end.” — New York Times

“Like the labyrinthine library at its heart, this brilliant novel has many cunning passages and secret chambers . . . Fascinating . . . ingenious . . . dazzling.” — Newsweek

“The Name of the Rose succeeds at being amusing and ambitious at the same time. It can be regarded as a philosophical novel masked as a detective story, or a detective story masked as a historical novel, or even better as a blend of all three. The venture sounds improbable, but Eco carries it out.” — New York Review of Books

“A brilliantly conceived adventure into another time, an intelligent and complex novel, a lively and well-plotted mystery.” — San Francisco Chronicle

“Whether you're into Sherlock Holmes, Montaillou, Borges, the nouvelle critique, the Rule of St. Benedict, metaphysics, library design, or The Thing from the Crypt, you'll love it. Who can that miss out?” — Sunday Times (London)

“Unfolds in an atmosphere thick with hostility and intrigue . . . Although The Name of the Rose is not a story of semiotics, Eco the novelist shares with Eco the semiotician a feeling for the world as a place rich with possible meanings.” — Christian Science Monitor