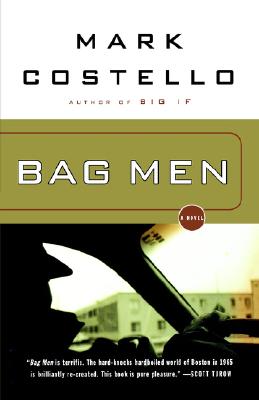 It is New Year's Day, 1965, and the body of Father George Sedgewick is discovered on a snow-covered runway of Logan Airport. Gone missing are four thousand communion hosts consecrated by Pope Paul VI, meant to be given out to the faithful at the first English-language mass in America later that year.
Ray Dunn, a rising young assistant district attorney and the son of a corrupt cop, is assigned to the case. In another part of the city, legendary narcotics detective Manny Manning begins a desperate search for the shadowy source of deadly new heroin hitting the streets. This time Manny is determined to reach the top, but his adversary is cunning, brutal--and branching out into a strange drug called "acid."
These quests for a killer and a dealer will intersect, unleashing the ghosts of the past and unlocking the secrets of Boston's most powerful institutions. Authentic, knowing, and bracingly cynical, Bag Men is a powerful thriller that will keep readers on the edge of their seats.

"Bag Men is terrific. The hard-knocks, hardboiled world of Boston in 1965 re-created, and the story and the characters are beautifully realized. This book is pure pleasure."--Scott Turow

"One of the most powerful and impressive pieces of crime fiction in recent memory . . . A strange, sad, violent odyssey."--The Wall Street Journal