Out of the Labyrinth: Setting Mathematics Free (Hardcover) 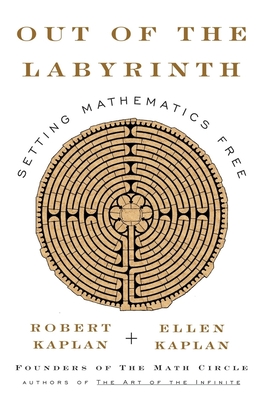 By Robert Kaplan, Ellen Kaplan
$25.00
Email or call for price.

Who hasn't feared the math Minotaur in its labyrinth of abstractions? Now, in Out of the Labyrinth, Robert and Ellen Kaplan--the founders of The Math Circle, the popular learning program begun at Harvard in 1994--reveal the secrets behind their highly successful approach, leading readers out of the labyrinth and into the joyous embrace of mathematics.
Written with the same wit and clarity that made Robert Kaplan's The Nothing That Is an international bestseller, Out of the Labyrinth offers an engaging and practical guide for parents and educators, and a delight for anyone interested in sharing the pleasures of mathematics. The Kaplans begin by describing the state of modern math education--the lockstep acquisition of skills, number facts, and mad minute calculations. Instead, they argue, math should be taught as the highest form of intellectual play, an endeavor to be explored and enjoyed by children (or adults) of any age. One by one, they dismantle the many barriers to appreciating mathematics, from the self-defeating belief that mathematical talent is inborn, to the off-putting language of mathematics, to the question of why anyone should care. They show, for instance, that mathematical ability is not a matter of inborn genius, but of doggedness and attention. Even Einstein admitted that I know perfectly well that I myself have no special talents. It was curiosity, obsession, and sheer perseverance that brought me to my ideas.
Enhanced throughout with puzzles, practical equations, and colorful anecdotes from their own classrooms, Out of the Labyrinth will delight readers with its engaging exploration of mathematics. It will allow students, parents, teachers, and others to wrestle with the accessible mysteries of math--and discover their inner math genius.

Robert and Ellen Kaplan have taught mathematics to people from six to sixty, at leading independent schools and most recently at Harvard University. They are the founders of The Math Circle, a program for the exploration and enjoyment of mathematics, which is opening branches across America and Great Britain. Robert Kaplan is the author of the best-selling The Nothing That Is: A Natural History of Zero, which has been translated into 10 languages, and together they wrote The Art of the Infinite. Ellen Kaplan is also co-author of Chances Are: Adventures in Probability.