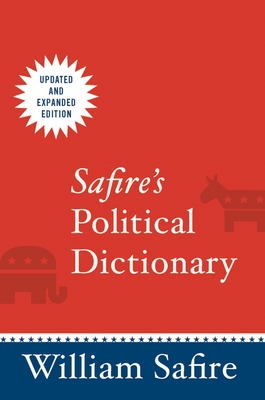 When it comes to the vagaries of language in American politics, its uses and abuses, its absurdities and ever-shifting nuances, its power to confound, obscure, and occasionally to inspire, William Safire is the language maven we most readily turn to for clarity, guidance, and penetrating,
sometimes lacerating, wit. Safire's Political Dictionary is a stem-to-stern updating and expansion of the Language of Politics, which was first published in 1968 and last revised in 1993, long before such terms as Hanging Chads, 9/11 and the War on Terror became part of our everyday vocabulary. Nearly every entry in that
renowned work has been revised and updated and scores of completely new entries have been added to produce an indispensable guide to the political language being used and abused in America today. Safire's definitions--discursive, historically aware, and often anecdotal--bring a savvy perspective to our colorful political lingo. Indeed, a Safire definition often reads like a mini-essay in political history, and readers will come away not only with a fuller understanding of particular words
but also a richer knowledge of how politics works, and fails to work, in America. From Axis of Evil, Blame Game, Bridge to Nowhere, Triangulation, and Compassionate Conservatism to Islamofascism, Netroots, Earmark, Wingnuts and Moonbats, Slam Dunk, Doughnut Hole, and many others, this language
maven explains the origin of each term, how and by whom and for what purposes it has been used or twisted, as well as its perceived and real significance. For anyone who wants to cut through the verbal haze that surrounds so much of American political discourse, Safire's Political Dictionary offers a work of scholarship, wit, insiderhood and resolute bipartisanship.

William Safire began his writing career as a speechwriter in the Nixon Administration, became a columnist with the New York Times--as its resident token conservative--and has for many years written a weekly On Language column in the New York Times magazine. His many books include Lend Me YourEars, How Not to Write, Scandalmonger, and Wit and Wisdom. He lives in New York City.